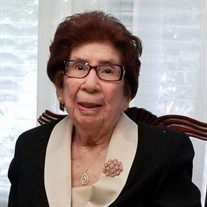 Adelaida M. Sánchez February 18, 1925- October 3, 2021 San Antonio, Texas Our beloved pillar of strength and matriarch of the Sánchez family, Adelaida M. Sánchez, died on Sunday, October 3, 2021. Adelaida, the sixth and last child of Francisco Medina and Eulogia Alafita, was born in Evant, Texas on February 18, 1925. Her parents and siblings Gregorio, Gregoria, Miguel, José and Domingo preceded her in death. Her father, Francisco, died when Adelaida was 8 years old. Adelaida spent most of her childhood in Lampasas, Texas, and she displayed a quiet strength and a no-nonsense personality quite early on. When she was five years old, a group of young boys broke one of the headlights of her father’s truck while she was waiting inside it. Unfazed, Adelaida got out of the truck, followed the boys to their father’s vehicle, and then hurled a brick through the windshield! As she grew up, Adelaida channeled that same tenacity into fiercely caring for her family. After her father’s passing, her mother married Encarnación Rodriguez. In 1940, at the age of fifteen, Adelaida moved with her mother and stepfather to San Antonio, Texas. It was in San Antonio that she met her future husband, Ramón R. Sánchez. They were married on August 20, 1950, and partnered together to provide a loving and supportive home for their family. Adelaida and Ramón raised four children: Rosa Linda, Ramón, Raúl and Rafael. Later, Adelaida welcomed her son-in-law Henry Ornelas and her two daughters-in-law, Imelda Chapa and Monica Schurtman into the family. Adelaida was a very loving grandmother and great-grandmother. She had seven grandchildren: Julie Ornelas Carrera, Lisa Ornelas, Christopher Ornelas, Miguel Sánchez, Andrés Sánchez, Nicolas Sánchez Schurtman and David Sánchez Schurtman. She also had two great-grandchildren: Nate Ornelas Machis and Ariana Carrera. She loved cooking for her family and often showed her love by preparing wonderful meals. If you ever got the opportunity to visit her at home, she would have asked you if you had eaten and would have fed you if you had not! She made the best flour tortillas and she made them every day. Adelaida had a sweet tooth and loved finishing dinner with a little coffee and dessert, even if that was just a piece of sweet bread from the panadería. Adelaida was a woman of faith in the Lord and had a strong devotion to Our Lady of Guadalupe. She prayed daily for everyone, and the strength of her prayers were well known. It was not unusual for people to ask her to pray for them and she gladly prayed for anyone who asked. Adelaida will be greatly missed along with her husband Ramón who preceded her in death. However, her family draws strength from her love, faith and the pragmatic way she approached this life. She is survived by her children, son and daughters in law, grandchildren and great grandchildren. Services will be held at 9:30 am, on Wednesday October 27, 2021, at St. James the Apostle Catholic Church, located at 907 W Theo Ave., San Antonio, Texas. Interment will follow at Fort Sam Houston National Cemetery at 11:00 am. Family requests that all guests wear masks and practice social distancing.

The family of Adelaida M. Sanchez created this Life Tributes page to make it easy to share your memories.

Send flowers to the Sanchez family.