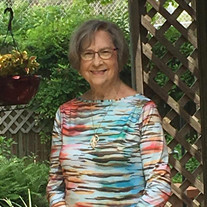 Alberta Jane Lochte, 84, left this earth to be with her Lord and Savior, Jesus Christ, September 8, 2021. Born in Mason, Texas, September 22, 1936, to her parents Elgin Dittmar & Marie (Becker) Dittmar. She graduated from Fredericksburg High School in 1954 after attending Pilot Knob Elementary School and Doss Middle School. Alberta moved to San Antonio as a newlywed, with her surviving husband of 67 years, Kermit Hugo Lochte. She is survived by her three sons and one daughter, Ronald & Cassie Lochte of Cypress, Ross & Donna Lochte of San Antonio, Royce & Susan Lochte of New Braunfels and Terry & Charlie Schultz of San Antonio. Alberta was blessed with three grandchildren, Louis Lochte, Rebekah Lochte and Rachel Lochte. She is also survived by her favorite, furry companion Mattie. Alberta also had three brothers and one sister, Wilfred Dittmar (deceased) and sister-in-law Harriett Crenwelge of Fredericksburg, Melvin Dittmar (deceased) and sister-in-law Judy of Quihi, Nolan Dittmar and sister-in-law Ellie of Arlington, and Lynette Ray and brother-in-law Dr. Robert Ray of Waco. Alberta's love for her family and her church were what brought her the most joy in life. She was always gentle, loving and kind to her family and friends. She worked as a Sunday School teacher, Altar Guild member, receptionist, and greeter before services at her church. She helped deliver "Meals on Wheels" for several years, among many others activities. While raising their four children, Alberta worked for Joske's, Lutheran Social Services, and Alamo Windshield. Kermit and Alberta's love for travel took them through most states, including far-off places like Hawaii, Alaska and Europe. Not only was Alberta an avid gardener, she visited places such as the tulip gardens in Holland, the Botanical Gardens in Mobile, Alabama, and the Butchart Gardens in Victoria, Canada. Their sense of adventure included riding trains in places such as the Durango to Silverton in Colorado, Canada to Alaska by rail, the cog rail up Mount Washington in New Hampshire, another cog rail up the Jungfrau Mountain by Interlaken, Switzerland, and a train into a salt mine outside Salzburg, Austria. Alberta and Kermit were also members of the Model A Ford Club for nearly 30 years. On Saturday, September 18, 2021, A Celebration of Life will be held at Abiding Presence Lutheran Church, 14700 San Pedro, San Antonio, 78232. Viewing at 1:00 p.m., Service at 2:00 p.m., with burial following at Mission Burial Park North. In lieu of flowers, donations may be made to the charity of your choice.

The family of Alberta Jane Lochte created this Life Tributes page to make it easy to share your memories.

Alberta Jane Lochte, 84, left this earth to be with her Lord...

Send flowers to the Lochte family.