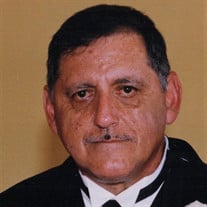 Andrew T. Montez July 8, 1944 – January 23, 2022 Andrew T. Montez passed away on January 23, 2022, at 77 years old. He was born on July 8, 1944, in San Antonio, Texas to Alberto and Herlinda Montez. He was preceded in death by his parents and brother, Roland Mantz. He is survived by his wife of 48 years, Mary Montez; his brother, Lionel Montez; sons Vincent, James, and Ruben, daughters Peggy, Michelle, and Vanessa. He was blessed with many nieces, nephews, grandchildren, as well as extended family and friends. Andrew worked for many different companies, most notably for the US Postal Service, Southern Pacific Railroad and SAISD. He served in the US Army during the Korean DMZ Conflict as a tank operator and was an accomplished marksman. Andrew had a natural ability to strike a conversation with strangers and make an impression. With his gregarious persona, he was often the life of the party. The family kindly request the use of masks. Funeral services will be held on Tuesday, March 1, 2022, beginning at 10 am Alamo Funeral Home 624 N. Alamo St., San Antonio, TX 78215 Interment to follow at Fort Sam Houston National Cemetery, 1520 Harry Wurzbach Rd., San Antonio, TX 78209 In lieu of flowers, please consider donating to the Texas Veterans Commission at https://www.tvc.texas.gov

The family of MR. ANDREW T. MONTEZ created this Life Tributes page to make it easy to share your memories.

Send flowers to the MONTEZ family.