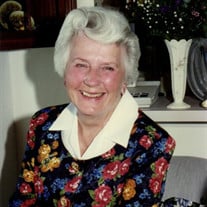 Billy Jeanne Cavender Watson who loved to be called “Mimi” by her beloved grandchildren, passed away on November 19, 2021. Billy, was born in San Antonio on September 11, 1923 to Arthur and Ruth Cavender. Billy married her next door neighbor Porter H. Watson Jr on October 8, 1943 in Amarillo, Texas. Billy was mother to Porter Hartley Watson III, Wayne Cavender Watson and Scott Robert Watson. She raised her children on Air Force Bases around the United States and Okinawa finally settling back in San Antonio in the mid-sixties where they set up home in Hollywood Park. Once her children were grown Billy worked as a telephone operator at USAA. She retired after twenty years of service. Billy was devoted to the church and loved attending Parkhills Baptist Church. She spent many happy years as a volunteer at North Central Baptist Hospital where she was known and loved by everyone who worked there. She was most proud of being a grandmother, great-grandmother and great-great grandmother She is survived by her son Wayne Cavender Watson (Maureen) and daughter-in-law Brenda Burdette Watson. Her grandchildren; Scott Robert Watson, Jr., Tanya Watson (Scott), Jeff Cavender Watson (Danielle), Aimee Young (Eric), Jessica Baker (Logan) and Kathryn Bratton (Forrest). Her great-grandchildren, Avery Montgomery (Alana), Audrey Montgomery, and Ashton Montgomery, Shae Dearman, Kelsey and Bailey Watson, Lyla Baker, Ian and Niels Bratton. Her great-great granddaughter, Adelynn Montgomery. She was preceded in death by her sister Doris Hull, her Mother and Father, her husband, and her sons Scott and Porter. Visitation will be held on Friday, November 26, 2021 beginning at 11:00am, followed by a 12:00noon chapel service at the funeral home. Interment will be at San Jose Burial Park. In lieu of flowers, donations may be made to the St. Jude’s Research Hospital in Billy’s name.

Billy Jeanne Cavender Watson who loved to be called &#8220;Mimi&#8221; by her beloved grandchildren, passed away on November 19, 2021. Billy, was born in San Antonio on September 11, 1923 to Arthur and Ruth Cavender. Billy married her next... View Obituary & Service Information

The family of Billy J. Watson created this Life Tributes page to make it easy to share your memories.

Billy Jeanne Cavender Watson who loved to be called “Mimi” by...

Send flowers to the Watson family.