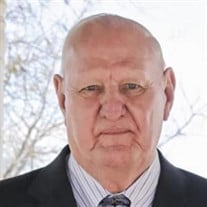 Carl Otto Luddeke was called home by the Lord, our Savior, on Monday evening, December 20, 2021 at the age of 73. Carl was born August 22, 1948, to Roland and Elnora Luddeke in San Antonio, Texas. He was baptized and confirmed at St. John’s Lutheran Church in downtown San Antonio. Carl was preceded in death by his parents and brother Benold Luddeke. He is survived and will be greatly missed by his loving wife of 52 years, Connie Luddeke; siblings, Verna Brown, Joyce Wolfe, and Malton Luddeke (Linda); children Jeff Miller (Julie), Becky Nance, and Amber Setzer (Jonas); grandchildren, Rylee Nance (Megan), Miranda Uecker (Colin), Jared Setzer, and Abby, Sage and Jeffery Miller; and many nephews and nieces. Carl attended Sam Houston High School in San Antonio, TX, class of 1966. After high school, he served in the United States Army for three years. While stationed at Fort Carson in Colorado Springs, Colorado, he met the love of his life, Connie. After getting married in 1970, they moved their small family to San Antonio. He worked for Bill’s Cabinet Shop in Kirby before deciding to become a police officer. He worked for Kirby Police Department, Terrell Hills Police Department and finally settled at Castle Hills Police Department, where he retired as Chief of Police in 2001. Of course, Carl couldn’t stay retired. He rejoined the workforce a year later and started working for HEB. There, he enjoyed interacting with the customers. Carl loved his family and enjoyed going to family functions. His favorite times were always when everyone was together, and especially loved family reunions. He loved getting to see and talk to all of his cousins, aunts and uncles, sharing stories of “the good times” and keeping memories alive. Carl loved to hunt, fish, go on cruises, and watch the Cowboys games and Lifetime movies. Carl especially loved the dogs he raised with Connie, most recently Maggie, Max and Molly. His presence will be deeply missed by all. Services for Carl Luddeke will be at Mission Park South Funeral Home on SE Military Drive. Visitation will be Sunday, December 26, from 5-8 pm. The funeral will be held Monday, December 27 at 1pm in the Chapel with a reception to follow at the Heritage House on site. Pallbearers include: Jared Setzer, Rylee Nance, Colin Uecker, Ronnie Bowles, Gary Jungmann, and Aaron Jones. In lieu of flowers, donations may be made in honor of Carl Luddeke to the Fisher House, Inc. of San Antonio. (Mail: Fisher House, INC. 7323 Hwy 90 West, Suite 107 San Antonio, TX 78227 or fisherhouseinc.org)

Carl Otto Luddeke was called home by the Lord, our Savior, on Monday evening, December 20, 2021 at the age of 73. Carl was born August 22, 1948, to Roland and Elnora Luddeke in San Antonio, Texas. He was baptized and confirmed at St. John&#8217;s... View Obituary & Service Information

The family of Carl Otto Luddeke created this Life Tributes page to make it easy to share your memories.

Carl Otto Luddeke was called home by the Lord, our Savior, on...

Send flowers to the Luddeke family.