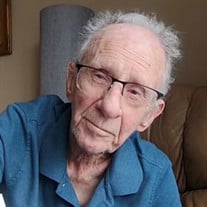 Captain Charles Leslie Skidmore, retired USAF and Civil Service, passed into the arms of his Lord and Savior, Jesus Christ, on Monday, April 25th in New Braunfels, Texas, with both of his daughters by his side. He is preceded in death by his beloved wife of 57 years, Elsie B. Brown Skidmore, originally of Paige, Texas. “Les” was born in Geneva, Ohio on July 22nd, 1929, son of Charles Guy Skidmore and Alta Leslie Bishop, both deceased. Les is survived by his two daughters, Lesley Mergele (Joe) of New Braunfels and Sherry Phillips (Matthew) of Austin, and four grandchildren, Sara Mergele Czeiszperger (Dan) and A.J. Mergele, Mark D. Phillips (Natalie) and Rick Phillips (Amy). He is also survived by his five great-grandchildren, Wesley, Tyler, and Colton Williams (Sara), and Madison and Jack Phillips (Mark), and nieces and nephews. At the young age of ten during the Depression, he began to work delivering newspapers, selling magazines and cigarettes, setting double line bowling pins at Geneva-on-the-Lake, and selling tickets at a Greyhound Bus station. He also worked at his father’s small grocery store in Geneva until he graduated from Geneva High School in 1947. Les then entered Miami University of Oxford, Ohio, in 1947 and by the summer of ’48, the Korean Conflict broke out. By the end of his second year, Les applied to the USAF to become an Aviation Cadet. He was appointed to the Air Force and officially inducted as a Cadet in November 1949. He attended and graduated from Ellington AFB Navigation School in Houston, Texas. He was then commissioned as a Second Lieutenant Navigator in February 1951 and was assigned to the Air Rescue Squadron in Harmon Field, Newfoundland, flying mostly SB-17’s and SA-10 amphibians. During that time, his squadron conducted search and rescue operations out of Lages AFB, Azores. As a navigator, without instruments or GPS at that time, Captain Skidmore flew off the coast in the North Sea doing grid searches for downed military and civilian ships and planes. He used sextants, maps, stopwatch, a compass, and the stars in the sky as his guide. His next tour of duty was the 56th Air Transport Squadron at Kelly AFB in San Antonio, Texas, where he flew the C-54, D-97 and C-130. It was there that he met his future wife, Elsie, and they were married on June 20, 1953. Their daughters, Sherry and Lesley, were born in 1954 and 1955, respectively. He was assigned to the Air Force Institute of Technology in May 1957 and proceeded to the University of Oklahoma at Norman to complete his Bachelor of Business Administration in 1959. Les was then assigned as Administrative and Personnel Officer to the 1240th AACS squadron in Athens, Greece. He and his family, their dog, Julie, and their new ’59 Chevrolet sedan, boarded a military transport ship in Brooklyn, NY and sailed for eight days before reaching their first port at Cadiz, Spain. Subsequently, they sailed into Barcelona, Spain, Piza and Naples, Italy, Tripoli, Libya and finally into Athens where he and his family lived for three years. He also had detachments in Crete and Izmir, Turkey. From there he was reassigned to the Air Force Reserve Officers Training Corps Detachment 710 at Gettysburg College, PA, where he was the Executive Officer and Professor of Air Science instructing college AFROTC juniors. After retiring in 1965, the family returned to San Antonio. He was then hired at Kelly AFB as a contract negotiator in Procurement until his second retirement in November 1987. As a civil servant working for the military, he traveled to Honduras, Central America and landed one time on a military base under gunfire. Les proudly became a born-again Christian in 1985 and attended Cornerstone Church with Pastor John Hagee where he and Elsie attended/taught weekly bible studies and were cell leaders in the Cornerstone Government of XII. Les also ushered during the 11:00am worship services. Les and Elsie enjoyed traveling in their motorhome and many happy years leading a quiet retirement in San Antonio. Our family would like to thank Hope Hospice, New Braunfels, for their diligent service to Les since February 2022. Special thanks to Tina, RN, Vanessa, Pastor Tom, Nicole, Rich (volunteer) and the On Call emergency RN’s. Additionally, we would like to thank the volunteer veteran group from Hope Hospice who blessed Les with a private bedside ceremony thanking him for his military service and presenting him with personal gifts. We would also like to thank Sandra LeBlanc, Executive Director of Elan Westpointe, New Braunfels, and their amazing staff where he spent the last six months of his life. We would especially like to thank caretakers Morris, Maya, Abby and Lelaine for their tireless compassion and care. Visitation will be held at Mission Park Chapel North on Saturday, April 30th from 1-3pm followed by a service at 3pm. Burial will be on Wednesday, June 8th, at Ft. Sam Houston at 11am with military honors. In lieu of flowers, donations may be made in his memory to Options for Life, 1126 N. Loop 337, New Braunfels, Texas (optionsforlifenb.org)

Captain Charles Leslie Skidmore, retired USAF and Civil Service, passed into the arms of his Lord and Savior, Jesus Christ, on Monday, April 25th in New Braunfels, Texas, with both of his daughters by his side. He is preceded in death by his... View Obituary & Service Information

The family of Charles Leslie (Les) Skidmore created this Life Tributes page to make it easy to share your memories.