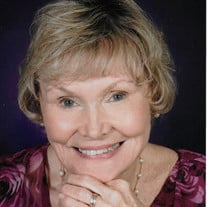 Charlotte Jane Tharp Darwin Smith was called home by our Lord on November 25, 2021 at the age or 90. Born to Rev. and Mrs. R.H. Tharp in Houston, Texas Charlotte moved with her family to Tucson, Arizona after her father accepted the pastorate of a Baptist church there. She graduated from Tucson High School in 1949. After attending Baylor University, she received a B.A degree from the University of Southern Mississippi. She taught Speech/Drama in North Carolina high schools for 15 years before earning her Masters of Library Science degree and becoming a librarian for the last fifteen years of her career. She was the Secretary of the N.C Library Association for a number of years and held an office in the Goldsboro, NC Arts Council while directing, acting or working back stage. Upon retiring, Charlotte moved back to Texas and has lived in San Antonio since 1996. She is survived by her sons Kenneth Ross Darwin of Miami, Florida and Jeffrey Tharp Darwin (wife Cindy) of Dudley, North Carolina and sister Jo Tharp of Houston, Texas. The four living grandchildren are Roxanne Darwin, Brittany Darwin Wallace, Travis Darwin and Alicia Maughan and three great-grandchildren, as well as many nieces and nephews. Proceeding her in death was the loving father of their children James Carlton Darwin, and her second loving husband Richard Rix Smith, her daughter Suzanne Darwin, and her sister Evelyn Simons (husband Vernon), sister Eula Mae Baugh (husband John) brother Dr. Warren Tharp (wife Mary Lee) and Brother Sterling Tharp. Charlotte and her first husband James (Pete) Darwin were active in the Baptist churches while living in Mississippi, Arkansas and North Carolina. They attended their children’s sporting events, and were proud of them in golf, tennis and cheer leading. The family outings to Biloxi and the mountains in Ashville, NC were memorable. After Pete’s death, Charlotte continued teaching until she retired, and then moved back to Texas, to be near her sisters Evelyn and Eula Mae. She became active in the adult Sunday school class for retired seniors, where she met her future husband Richard (Dick) Smith. The following year they began traveling extensively by touring and cruising to China, the Mediterranean, Australia, New Zealand and other foreign countries. Charlotte’s favorite volunteer group was the SonShireSingers, and some fondest memories were performing for the Senior Living facilities every Monday for many years. Her niece Babs Baugh was the director of the SSS. When they entertained at Adante Senior Living, she and Dick knew that Adante was their choice for their retirement place. She requested that we include her appreciation for the friends at Woodland Baptist Church, the over a hundred SonShineSingers and the many residents at Adante Independent Living. She also wants to recognize her step-children, who have been so supporting of her since their father’s death: Sharon Smith Weber, (husband Karsten) and step-granddaughters Sandra Weber and Erica Weber, step son Perry Smith (wife Elizabeth) and step-grandson Travis and step-son Kelly Smith. Saturday, March 12, 2022 there will be a Celebration of Life at 2:00PM at Woodland Baptist Church, Huebner Rd. San Antonio, TX. In lieu of flowers, the family requests memorials be sent to Woodland Baptist Church Building Fund of the charity of your choice

Charlotte Jane Tharp Darwin Smith was called home by our Lord on November 25, 2021 at the age or 90. Born to Rev. and Mrs. R.H. Tharp in Houston, Texas Charlotte moved with her family to Tucson, Arizona after her father accepted the pastorate... View Obituary & Service Information

The family of Charlotte Darwin Smith created this Life Tributes page to make it easy to share your memories.

Send flowers to the Smith family.