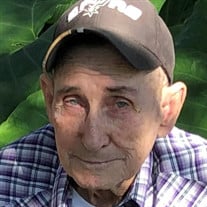 Chester Harlen Barnes Jr. passed away on February 27, 2022, at the age of 77, in San Antonio, TX. He was born on May 22nd, 1944 in San Antonio, TX. He is preceded in death by his parents, Chester H. Barnes Sr. and Helen L. Barnes (Peter). Chester is survived by his daughters, Delane M. Barnes and her fiancée, Charles A. Schnitz Jr., and her son, Travis W. Barnes, his wife, Lindsey Barnes, and their son, Jack W. Barnes. Stephanie M. Riley (Barnes) and her son, Shelby R. Riley, his wife Maria “Shellby” Riley, children, Aurelia and Lloyd Riley, and her daughter, Brytney Riley, and child, Grayson Roman. Chester is also survived by his sisters, Joan Ross (Barnes) and family, Theresa Nelson (Barnes) and family, and his brother, Ernest Barnes and family. Chester had served in the US Army as an Airplane Mechanic and honorably discharged. After leaving the service Chester had worked at various ranches and held various jobs according to his interests (construction, remodeling, vehicle test driver, mechanic, and truck driving) throughout the years. Chester had played in a band (honky tonk band) with his father before he had passed; they were able to share their love for old country music. Chester had cared for his mother prior to her passing, believing in family values and that children were to care for their loved ones, showing respect. Graveside service only will be Tuesday, March 29, 2022 at 11:15 a.m. at Ft. Sam Houston National Cemetery.

The family of Chester Harlen Barnes Jr. created this Life Tributes page to make it easy to share your memories.

Send flowers to the Barnes family.