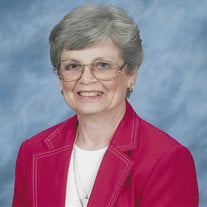 Dana Janell Roper was born on February 2, 1934, in Prosper, Texas. One of 6 Siblings, with four (4) Brothers (Charles, Everette, Truett and Fred) and one (1) Sister (Loueva Ann) to Father, Croney Fletcher Furr and Mother, Lola Mae Furr. The family prided itself on running a “1,500-acre share-cropper farm” for a South Texas based physician and she relished being the “Apple of her Daddy’s Eye”! She was Valedictorian of her Prosper High School graduating class of 1952 and enrolled in Mary-Hardin Baylor Women’s College. She met the love of her life through Baptist Student Union (BSU) mixers between Belton and College Station during her freshman and sophomore years. Dana was nick-named “Dana-Belle” by the “Chain Gang”, a Bible-Study group created by Paul at A&M. Dana and Paul Roper married upon his graduation from Texas A&M College after receiving his Military Commission in 1954. Shortly after, Paul began his military service in Europe, while Dana stayed State-Side and ultimately graduated from North Texas State Teachers College in 1956 with a BA degree in Education. Paul’s service was completed later in 1956 and Dana met him in New York City when he returned home. She then accompanied him to Iowa State University and supported him while he pursued his Graduate Degree. Dana and Paul then settled in San Antonio, Texas, and were blessed with twin boys in 1958. Dana spent her professional career as an Educator with the Edgewood ISD and then Northeast ISD in various positions from Classroom Instructor to the NEISD Central Office Administrative Support Lead due to her exceptional organizational and record-keeping skills. She was a passionate advocate for education, especially for young women, and prided herself on her career accomplishments. For over 60 years she was a member in good standing at First Baptist Church in San Antonio and for 30 of these years oversaw the Children’s Nursery Ministry. An avid church go-er, “twice on Sunday and every Wednesday evening,” her close friends were all members of FBC. Even after she could no longer physically attend services, Dana continued to demonstrate her strong commitment to her faith through daily Bible study and readings. Dana was an avid sports fan and kept up on all the stats and seasonal outcomes, for both professional and collegiate leagues. As San Antonio was her home for over 55 years, her favorite team to watch was the Spurs. She was also eternally loyal to the university that her husband and two sons attended: Texas A&M at College Station. Besides sports, Dana loved her family and friends dearly. She made sure to communicate her love by sending greeting cards and never missed an important date or milestone. She also treasured the notes she received in return, diligently storing every keepsake for decades. Her kitchen and refrigerator were full of drawings and school photos from her grandchildren, which she hung proudly. Her living room, hallways, and every flat surface of furniture were covered in family photos. Dana made sure everyone knew felt how much she loved them. Dana Roper is survived by her 2 sons: Boyce Roper and wife Lisa of Katy, TX and Brian Roper and wife Holly of Ivins, UT. Three (3) Grandsons, Bobby (mother Elisa Eddleman Farris, and wife Haleigh) Katy, TX, Mathew and Andrew, Katy, TX and two (2) Granddaughters: Erin (husband Billal, Toronto, CN) and Mackenzie of Denton, TX as well as 2 Great Grandchildren through Bobby and Haleigh: Kennedy and Truett of Katy, Texas. Interment will be at Fort Sam Houston National Cemetery on Monday April 18, 2022 at 9:00 am with a graveside service. Memorial contributions can be made to the Charcot-Marie-Tooth Association, Box 105, Glenolden, PA 19036. Homepage: https://www.cmtausa.org/ , the American Cancer Society or the TV ministry at First Baptist Church, San Antonio. Arrangements are with Mission Park Funeral Chapels North.

The family of Dana J. Roper created this Life Tributes page to make it easy to share your memories.

Send flowers to the Roper family.