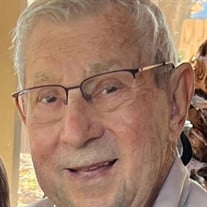 Daniel Bryant Henry passed away on Saturday April 2, 2022 at the age of 84 in San Antonio, Texas. Daniel was a longtime resident of Lake Charles, La. where he met his wife, Claudette Fontenot Henry, of 63 years. Daniel retired young at the age of 56, and he and Claudette enjoyed their retirement years. After building a home on Toledo Bend near Hemphill, TX, Dan and Claudette couldn’t settle. They bought an RV and spent the next 25 years traveling North America. They were avid RVers who traveled most of North America ranging from Mexico to the south, Canada and Alaska to the north, the Rocky Mountain region of the west and the New England States. They would spend the winter months in either south Texas (the valley) or in the Phoenix, AZ area. Daniel and Claudette were never apart from one another in these years. Dan’s children would often complain that they seldom knew where their parents were at any given time, but one thing they knew; from 1995 to 2018 Dan and Claudette were in Omaha, Nebraska for much of the month of June at the College Baseball World Series. From there they would get lost on the open highways and go wherever they wanted. Daniel was a thirty-year employee of Conoco. His career brought him rich experiences as he worked on international projects in places such as Dubai and domestic assignments that sent him across the USA from California to Delaware. On the domestic front He chose projects that would lead his family to move from Lake Charles to Ponca City, OK to Houston, TX back to Ponca City and finally a return to Lake Charles. When Daniel retired from Conoco in 1993 he was the Instrument Department Supervisor at the Westlake Refinery. Prior to the RV life Daniel had many hobbies. He was a great dad who coached his son in baseball and his daughters in softball. He was always there. He was an “old school” guy who could restore a car, construct a house, and repair just about anything. He enjoyed hunting, fishing, carpentry, gardening, car racing, square dancing, and most of all, traveling with his wife. Later in life he developed a passion for researching his ancestry. Daniel served two years active duty in the US Army at Fort Sill, OK. He was in the US Army Reserve for 6 years. Daniel, born October 5, 1937, was preceded in death by his parents, Isaac Walter Henry and Lillie Dyer Henry of Oberlin, La. He is survived by his sister, Icy Geraldine Beason of Charleston, SC who was always a great ‘big sister’ to him; his wife Claudette Fontenot Henry, the love of his life; and his three children Devin Henry of San Antonio, TX, Dana Henry of Austin, TX, and Deidre (John) Bergeron of Houston, TX. He had three grandchildren; Sydnie (Doug) Duhon, Daniel Patrick Henry, and Kara Anne Peroni. And last, he could not be more proud of his twin great-grandsons, Elijah and Liam Duhon. A private memorial will be held for Daniel at Oaklin Springs Baptist Church located at 267 Musselwhite Road Oberlin, LA 70655 on Saturday April, 23 at 1:00 PM.

Daniel Bryant Henry passed away on Saturday April 2, 2022 at the age of 84 in San Antonio, Texas. Daniel was a longtime resident of Lake Charles, La. where he met his wife, Claudette Fontenot Henry, of 63 years. Daniel retired young at the... View Obituary & Service Information

The family of Daniel Bryant Henry created this Life Tributes page to make it easy to share your memories.

Send flowers to the Henry family.