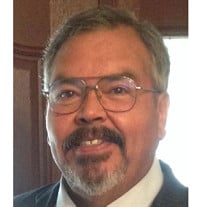 David left his earthly body, when his heart ceased, to begin his new life with our Lord Jesus on February 19, 2022 at the age of 68. He was born on December 26, 1953 in San Antonio, Texas to Nicholaus Davila and Amelia Rivas Wheeler. He is preceded in death by his parents, his stepfather Clifford Wheeler, grandparents Martin and Maria Rivas, and siblings Daniel Davila, Diana Lozano, and Ricky Martini. He is survived by his loving wife, Linda; daughters Leslie “Nicki” Martinez (Stan III) and Stephanie Davila (Casey IV); brother Matthew Martini (Paula); grandchildren Tanis IV, Millie, Esai, Eleazar, and Lucas; his dog-son Hondo and grand-dogs Quinn and Duke, along with numerous loving family members and friends. David and Linda met as members of the St. Stephen’s Youth Club over 50 years ago and were married 43 years. Linda immediately knew David was THE ONE because he came to the first meeting with a big bag filled with popcorn. After high school graduation, David started working at USAA where he worked his way up from the Mailroom to the Claims Training Department. After his 30-year career at USAA, he turned his woodworking hobby into his business, Fresh Start Designs. His handiwork can be seen throughout South Texas grocery stores and in the homes of his family and friends. Up to the day of his passing, David could be found in his workshop crafting tokens of his affection for loved ones. Anyone who knew him will also remember his love of cooking, barbequing, hunting, and spending times outdoors at the family ranch. David’s Catholic faith was deeply rooted in him. He achieved Third Degree Knight in the Knights of Columbus Council 4786. His legacy lives on through the multiple ways in which he served the Westside community with the Disciples of Christ, ACTS, and Finance Council at St. Timothy. David’s love of and devotion to Jesus Christ was as a model for those who crossed in his path. David always had a way to light up a room with his quick-witted humor. No one was safe from his pranks and jokes! He maintained close, special relationships with so many people, such as Tio Richard who was like a father to him, Tony, Dorelia, Paula, and Victor, as well as the Quintero, Fierro, Herrera, Hightower, Meneses, and Ramirez families. Yet, nobody could bring him more joy than his five grandkids. “Papi” made the best BBQ and spaghetti as far as they were concerned. They knew they could count on Papi to learn how to make a watch when all they wanted was the time. Papi was known to share words of wisdom and taught all of his grandkids life lessons that they will carry with them for the rest of their lives, especially how to leave the world better than they find it. He will be greatly missed by all who knew and loved him. Visitation will begin on Tuesday, March 1, 2022 at 8:00 a.m. at Mission Park Funeral Chapels South with a procession to depart the funeral home at 9:30 a.m. Rosary will be recited at 10:00 a.m. with a Funeral Mass to follow at 11:00 a.m. at St. Timothy Catholic Church. Interment to follow at Mission Burial Park South. In lieu of flowers, please send donations in his honor to the Knights of Columbus Council 4786 or to St. Timothy Catholic Church. Knights of Columbus 4786 PO Box 27654 San Antonio, Texas 78227-0654 St. Timothy Catholic Church 1515 Saltillo Street San Antonio, Texas 78207

David left his earthly body, when his heart ceased, to begin his new life with our Lord Jesus on February 19, 2022 at the age of 68. He was born on December 26, 1953 in San Antonio, Texas to Nicholaus Davila and Amelia Rivas Wheeler. He is... View Obituary & Service Information

The family of David R. Davila created this Life Tributes page to make it easy to share your memories.

David left his earthly body, when his heart ceased, to begin...

Send flowers to the Davila family.