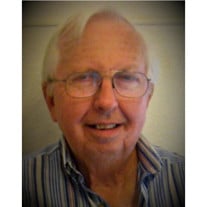 David Henry Hierholzer passed away peacefully on September 3, 2021 at the age of 86 years. David was born August 1, 1935 in Fashing, Texas to Dewey H. Hierholzer and Milda S. (nee Tolle) Hierholzer. HIs family later moved to New Braunfels, where he graduated from New Braunfels High School in 1953. After graduation, David worked as a weaver at the Mission Valley Mill. In 1956, he enlisted in the US Army, and served 4 years active duty, stationed at Ft. Bliss, El Paso; Anderson Barracks, Germany, and Ft. Polk, Louisiana. Upon leaving active service, he began a 38-year civil service career with Air Logistics Command at Kelly AFB. Throughout his years at Kelly, he was very proud of the many awards and recognitions he received. In 1962, he married Carol Ann Jolly, and they raised 2 daughters. In 1997, he earned his Bachelors of Applied Arts and Sciences in Environmental Management at Southwest Texas State University. In retirement, he was active as the membership director for the Comal County Genealogy Society for 18 years. David was a true lover of nature, bird watching and all animals, including his work in high school FFA as well as many domestic pets over the years. He is preceded in death by his parents, his sister, Lorraine Seiler, and brother, Dewey, Jr. He is survived by his wife of 59 years, Carol Ann, daughters, Mary Simone Hierholzer and Myra Suzette Hierholzer. Visitation will be held 6-7 pm, on Sept. 16, and the funeral service will follow at 7 pm. at Mission Park Funeral Chapels North, 3401 Cherry Ridge, San Antonio, Texas, 78230. Graveside services will be on Sept. 17 at 2 pm at the Guadalupe Valley Memorial Park, 2951 TX-46, New Braunfels, TX 78130.

The family of David Henry Hierholzer created this Life Tributes page to make it easy to share your memories.

Send flowers to the Hierholzer family.