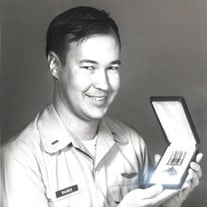 David G. Wagner, 77, tragically passed away on April 19, 2022. On August 21, 1944, he was born in Brady, Texas, and grew up alongside his brothers on a ranch outside of Mason, Texas. He is preceded in death by his first wife Cynthia Wagner, parents Martin and Marguerite Wagner, and brother and sister-in-law Phil and Pat Wagner. He is survived by his wife of 24 years, Irma B. Wagner; son Noel Wagner and children Ella, Landon, Sabrina, and Olivia; daughter Holly Harwell and husband Michael, and children Michael, III, Madison, and Brett; stepson Daniel Benjamin and wife Phyllis and children Shawnda, Joshua, and Jonathan; stepson Frank Benjamin and wife Shannon and son Nicholas; and great-grandchildren Payton and Autumn; bother Preston Wagner and wife Cordella; and numerous nieces and nephews. Throughout his childhood, David dreamed of flying. He lived out this dream as a Lieutenant Colonel in the United States Air Force and continued his career with the Federal Aviation Administration as a flight inspector. After retiring from both, Dave enjoyed staying active in Civil Air Patrol, Daedalians, Quiet Birdmen, and American Legion associations. He was presented with many awards, including the Distinguished Flying Cross and the Wright Brothers “Master Pilot” award. As an active lifelong Christian, he held membership at St. Paul Lutheran Church of Mason, Immanuel Lutheran Church of Pflugerville, St. Paul Lutheran Church in New Braunfels, and Southside Baptist Church. Irma and Dave recently built their dream retirement home to be closer to his best friend since kindergarten, Rodney Leifeste and his wife, Betsy. He enjoyed returning to country life, including taking care of his pets, flying his patriotic flags, and enjoying Irma’s delicious home cooking. His love and presence were so quiet yet so strong and is greatly missed by all who knew and loved him. Services will be on May 17, 2022, at Southside Baptist Church, San Antonio, Texas. Visitation at 11:30 am, service at 12:00 pm, burial at Fort Sam Houston National Cemetery at 2:00 pm and reception to follow at Fort Sam Houston Golf Club. Pallbearers are Michael Harwell, Jr, Michael Harwell, III, Brett Harwell, Nicholas Benjamin, Joshua Benjamin, and Jonathan Benjamin. Honorary pallbearers are Landon Wagner, Ron Wren, and Rodney Leifeste. In lieu of flowers, donations are requested to be made to the Tunnel to Towers Foundation or a charity of your choice.

David G. Wagner, 77, tragically passed away on April 19, 2022. On August 21, 1944, he was born in Brady, Texas, and grew up alongside his brothers on a ranch outside of Mason, Texas. He is preceded in death by his first wife Cynthia Wagner,... View Obituary & Service Information

The family of David Gerald Wagner created this Life Tributes page to make it easy to share your memories.

Send flowers to the Wagner family.