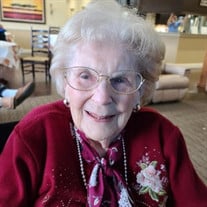 Dolores Catherine Grosser was born on December 17,1923 in West New York New Jersey to William and Catherine Grosser. Dolores’s mother died eight days after her birth, on Christmas day, leaving her heartsick husband with a motherless infant. Dolores was raised as an only child by her father, grandmothers and aunts. Her father never remarried. Dolores passed away on February 28th, 2022 in Helotes, Texas. Dolores graduated from Memorial High School in West New York and attended Our Lady of Good Council College in White Plains, New York. She graduated from that institution with a Bachelor Of Science degree in 1944 and subsequently worked at the Chrysler building in Manhattan, New York as a secretary. It was at Our Lady of Good Council College that a friend introduced her to her brother, a recent engineering graduate from Manhattan College named Jim Gillen. They started a courtship which was interrupted by World War II when Jim was called to serve in the US Navy as a seabee in the South Pacific. Dolores and Jim corresponded faithfully for two years until her sweetheart’s return home from the South Pacific in November, 1945. Dolores became Mrs. James S Gillen three months later on February 16, 1946 and she and her husband had a beautiful marriage that lasted 72 and 3/4 years. Dolores spent her young adult life raising four children and getting actively involved in each of their lives, from cub scout den mother to girl scout leader. Dolores and Jim fit together like two peas in a pod. They would frequently entertain their friends in their home and were always helping those in need in the community. After each of her children married, Dolores became friends with each of her children’s spouses and developed friendships with them that have lasted a lifetime. Dolores and Jim thoroughly enjoyed being grandparents, and Dolores handmade a quilt for each of her nine grandchildren. Dolores is preceded in death by her husband Jim and Her parents. She is survived by Her son James and wife Patricia, son Brian and wife Jean, son Daniel, and daughter Jane and husband Douglas. She is also survived by nine grandchildren: Michael and Marielle Gillen, Kevin and Lorraine Gillen, Hilary and Jacob Moskowitz, Brian and Mary Gillen, Jacqueline and Joseph Corsini, Deanna and Michael Masiar, Shawna Gillen, Jennifer and Alan Wan, and Matthew and Jessica Deptuch. Dolores is also survived by twelve great grandchildren.

The family of Dolores G. Gillen created this Life Tributes page to make it easy to share your memories.

Dolores Catherine Grosser was born on December 17,1923 in West...

Send flowers to the Gillen family.