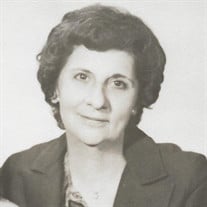 Dora Gloria Pierce, beloved mother, grandmother, great-grandmother and friend, passed away peacefully on December 6 at her home in San Antonio, surrounded by her family. Dora Rodriguez was born January 8, 1922, in San Antonio to Angela and Ben Rodriguez, a descendant of the early Spanish settlers of this area. She was orphaned as an infant but was fortunate to be raised by her loving grandparents Rosa and Luis Zepeda and many doting aunts and uncles. After her graduation from high school, she trained as a secretary and found employment at Kelly Air Force Base. One of her bosses was Joel Pierce, whom she married in 1945 during World War II while he was on leave from the Navy. Dora took her roles as wife, mother and friend very seriously. She kept an immaculate home despite the presence of four boisterous children and a husband with numerous hobbies. She was active in the PTA as a room mother, at one point being instrumental in organizing a polio vaccine drive at her children’s elementary school. Later in life she volunteered at St. Matthew’s Catholic Church in the library and as a Eucharistic minister. She enjoyed sewing, cooking, gardening, traveling and reading biographies and histories. She had a sharp mind even through the last days of her life, often reminding us to pay her bills on time. She was always concerned about others, welcoming her children’s and grandchildren’s friends into her home and offering love, support and snacks. Above all she wanted harmony in her home and her family. Dora is survived by her children Barbara Darnell (Charles), Joel David Pierce (Jessica), Anthony Pierce, and Carol Pierce (Rey Gonzales); grandchildren Sarah Wood (Daniel), Paul Darnell, Noah Pierce (Kate), Aidan Pierce and Anya Pierce; and great-grandchildren Zoe Wood, Connor Wood and Chloe Pierce. She is preceded in death by her beloved husband of 63 years, Joel Clyde Pierce.

Dora Gloria Pierce, beloved mother, grandmother, great-grandmother and friend, passed away peacefully on December 6 at her home in San Antonio, surrounded by her family. Dora Rodriguez was born January 8, 1922, in San Antonio to Angela and Ben... View Obituary & Service Information

The family of Dora Gloria Pierce created this Life Tributes page to make it easy to share your memories.

Send flowers to the Pierce family.