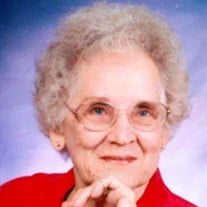 Dorothy L. Linder, a loving wife, caring mother, and the sweetest “Nana,” went home to be with her Lord and Savior, Jesus Christ, at the age of 97. Dorothy was born on October 9, 1924, in San Antonio, Texas, to Edward and Margaret Gray, and she died on November 4, 2021, in San Antonio, Texas. She was one of six children. She had two sisters (Helen Burns and Estelle Robbins) and three brothers (Edward, Charlie, and Johnny Gray). She married her sweetheart, Richard Ray Linder, on August 30, 1943, in San Antonio, Texas. They lived in San Antonio for many years and raised three girls and one boy. Then, Kingsland, Texas, became their home. It was referred to by the family as “The Lake”. After the tragic death of their 18 year-old son, Ricky, they worked as volunteers at Yellowstone National Park for a short time, then moved back to “The Lake”. Shortly after the death of her husband of 55 years, she moved back to San Antonio to be closer to her family. Dorothy loved people and she loved them well! One reason she loved was because God had loved her first by sending His only Son, Jesus Christ, to die for her sins, so that she might live forever with Him through His resurrection power. She believed this and walked many years with her Savior. She loved her various “church families” at Lovera Baptist Church, Highland Lakes Baptist Church, and Castle Hills First Baptist Church (now Mission City). She was a woman of prayer, and her family and friends were grateful! She sang in the choir and worked with the telephone ministry for years even when she was in her nineties. Dorothy was always working with her hands to bless others. She enjoyed crocheting and using plastic canvas to create thoughtful gifts. Dorothy was a gifted homemaker and talented seamstress. She loved to cook and bake and was famous for her delicious enchiladas, banana pudding, and Christmas candy. She helped out in World War ll by being a riveter. She wrote beautiful poems, and was a published poet. She loved to play games (any kind of game) because she loved laughing and spending time with family and friends. The family remembers the excitement she always added to the games when she would yell “Yahtzee!” or “Bingo!” or “Uno!”. She was definitely young at heart! She is survived by daughter Dorothy and Andy Jacobson of San Antonio, Texas, daughter Peggy and Michael Alford of Sherwood, Arkansas, and daughter Nancy Cloud of Bulverde, Texas. She is survived by 7 grandchildren: Becki Yancy of Sherwood, Arkansas; Michael Jacobson (and Tanna) of Bulverde, Texas; Brad Cloud (and Christy) of San Antonio, Texas; and Deanna (and Danny) Dring of Sherwood, Arkansas. She is survived by 15 great-grandchildren. Caitlin (and DJ) Resendez, Daniel Dring, Emily (and Joshua) Pistone, Hannah (and Michael) Olguin, Bethany (and Caleb) Pistone, David Cloud, Josiah Cloud, Ashlynn Dring, Caden Jacobson, Casen Jacobson, and Aison Dring. She is survived by 6 great-great-grandchildren: Serena, Mackenzie, Kalina, Adelyn, Darcy, and Luke. Survivors also include her sister, Estelle Robbins of San Antonio, many nieces and nephews, and many friends. Mrs. Linder was a sweet woman who was always willing to “lend her” hands to help others. Dorothy described in six words: loving, joyful, caring, enthusiastic, strong, and playful. A huge thanks to all the loving nurses and the awesome staff at Wurzbach Nursing and Rehabilitation, and Vitas, the wonderful hospice company, who helped all of us in her final days. In honor of Dorothy, who loved children and playing games, please consider donating a board game to a family in need, or to Make-A-Wish. Both the visitation and the funeral will be held at Mission Park North on 3401 Cherry Ridge, San Antonio, Texas, 78230. Visitation will be held from 7:00-9:00 p.m. on Thursday, November 11, 2021 at Mission Park Funeral Chapels North. The funeral will be held on Friday, November 12, 2021, at 10:00 a.m. at Mission Park Funeral Chapels North. Dorothy Linder will be buried at San Fernando III on 1735 Cupples Road, San Antonio, Texas, 78226, immediately following the funeral.

Dorothy L. Linder, a loving wife, caring mother, and the sweetest &#8220;Nana,&#8221; went home to be with her Lord and Savior, Jesus Christ, at the age of 97. Dorothy was born on October 9, 1924, in San Antonio, Texas, to Edward and Margaret... View Obituary & Service Information

The family of Dorothy L. Linder created this Life Tributes page to make it easy to share your memories.

Send flowers to the Linder family.