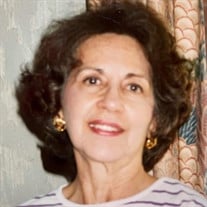 Elaine Juliet Barham died on November 11, 2021, In Austin, Texas. She was born in Georgetown, British Guiana on October 12, 1922. Her parents were Frank Stephen Vieira and Blanche Driffield Vieira. She was preceded in death by her husband, Richard, to whom she was married for 70 years. She met Lt. Richard Barham when he reported for duty in October 1942 while she was employed at the U.S. Air Force base near Georgetown. They married in March 1944 and traveled to the U.S. in June 1944 on a troopship transporting 200 German prisoners, which was part of a U.S. Navy convoy. Following the war Richard and Elaine lived in Houston, Austin, and Ann Arbor, Michigan while Richard completed his university education. In 1951 Richard become a U.S. Foreign Service Officer. Richard’s career in the Foreign Service resulted in the family living in several foreign countries—Norway, Cyprus, and Greece. Elaine played a key role as the wife of a Foreign Service Officer, attending numerous diplomatic functions with Richard, entertaining foreign government officials and diplomats at her home, and was even invited to dance by Lyndon Johnson when he visited Athens. Following the overseas tours Elaine and Richard lived in Washington, D.C. and Stamford, Connecticut before moving to Houston. While in Houston Elaine studied oil painting under noted artist Steve Parker and became an accomplished artist in her own right, specializing in landscapes, portraits, and still life. Upon Richard’s retirement he and Elaine moved to Austin, Texas, where Elaine continued honing her art skills at the Art School at Laguna Gloria. In her spare time she also enjoyed gardening and birding. Elaine raised a family of five children: the late Carol Kennedy of Abbottstown, Pennsylvania; Gail Cooper of Santa Cruz, California; Marsha Chadwick of Austin, Texas; Larry Barham of Liverpool, England; and Richard Barham, Jr. of Dripping Springs, Texas. She is also survived by eight grandchildren and 11 great grandchildren. SERVICES Funeral services and interment will be held on Monday, November 22, 2021, at 11:30 a.m., at the Mission Park Cemetery at 20900 IH 10 West, San Antonio, Texas 78257.

Elaine Juliet Barham died on November 11, 2021, In Austin, Texas. She was born in Georgetown, British Guiana on October 12, 1922. Her parents were Frank Stephen Vieira and Blanche Driffield Vieira. She was preceded in death by her husband,... View Obituary & Service Information

The family of Elaine Juliet Barham created this Life Tributes page to make it easy to share your memories.

Send flowers to the Barham family.