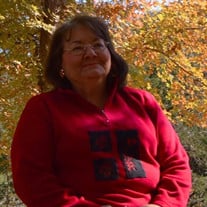 Elizabeth “Betty” Salvatierra, born in San Antonio, Texas on April 20, 1945, to Silvestro and Eufemia Carnevale, went to be with the Lord on October 31, 2021. Betty was a beloved mother to Bobby, Randy and Dawn and a doting grandmother to Sadie, Alec, Jordan, Sarah, Maddie, Ryan, and Amanda. She was a faithful woman who loved the Lord, her church and community. After graduating high school Betty proudly worked civil service for the Air Force. She also spent many years as a community activist fighting for her Hispanic brothers and sisters. Betty spent most of her career at The Center for Health Care Services with so many of her colleagues she considered not just friends but family. As a mom she made each of her children feel as though they were the favorite. She was an amazing grandma as well. She took a sincere interest in anything and everything her grandchildren were involved in from music to sports to Korean television and even anime. Betty never met a stranger, she considered everyone she met a friend. Betty was preceded in death by her parents, her sister Margaret Hinojosa (Mo), brothers Michael and Tony Carnevale as well as her oldest son, Robert Anthony “Bobby” Salvatierra. She is survived by her two children Paul “Randy” Salvatierra (Melissa Valdez) and Dawn Sanchez (Rick Sanchez) and her 7 grandchildren – Mercedes Sanchez, Alec Salvatierra, Jordan Sanchez, Sarah Sanchez, Madeleine Sanchez, Ryan Sanchez and Amanda Salvatierra, and her brother Sylvester Carnevale (Sidney). Services for Betty will be held on November 8, 2021, at 10:00 am at the Cornerstone Church Chapel, 18755 Stone Oak Parkway, San Antonio, Texas.

Elizabeth &#8220;Betty&#8221; Salvatierra, born in San Antonio, Texas on April 20, 1945, to Silvestro and Eufemia Carnevale, went to be with the Lord on October 31, 2021. Betty was a beloved mother to Bobby, Randy and Dawn and a doting grandmother... View Obituary & Service Information

The family of Elizabeth Carnevale Salvatierra created this Life Tributes page to make it easy to share your memories.

Send flowers to the Salvatierra family.