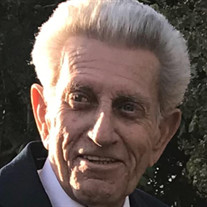 Elton Daigrepont went to be with the Lord on October 28, 2021 at the age of 77. He was born on March 24, 1944 in Cottonport, Louisiana. He is preceded in death by his parents Edwin Daigrepont and Eliska Daigrepont; son David Cervantes; sister Donia Petrey and brother Leray Daigrepont. He is survived by his loving wife of 29 years, 11 months and 19 days Ruth Daigrepont; daughters Linda (Skip) Manny, Bertha “Birdie” (Axel) Cervantes-Mendez, Julie Ratliff and Kala (Charles) Jenkins; sons Jesse (Lotta) Cervantes, Larry Daigrepont, Jason (Liz) Daigrepont and Randy (Alejandra) Jenkins; grandchildren Madyson, Joseph, Cassandra, Corina (Christian), Melissa, Kenny, Nathan, Dylan, Michael (Julie), Jakob, Daniel, Mia and Rosanna; great-grandchildren Cohen, MJ, Omar, Koby, Dominic and Bradley. He will be greatly missed by all who knew him. Elton Daigrepont was not a complicated man. He loved God, family, country and his Cajun heritage. He was born Cajun and never lost his Cajun roots. He had a endearing love for Cajun music and especially Cajun food. He was a member of the local Cajun French Music Association. He loved his country and was proud to have served in the Vietnam War as a Sergeant (E-5) 76T20 Aircraft Material Supply Specialist, First Brigade 1st Calvary Division (Air Mobile) “First Team.” After his tenure in the military he pursued his passion for trucks and became a semi-truck driver delivering highly volatile fuel. He did this for over twenty-two years working for Howell Hydrocarbons. After retiring from Howell he opened up his own independent trucking company. He gave 100% of himself making it a successful trucking business. Lastly, his love for his family was his greatest endeavor. Never faulting, never wavering in his love for Wife, kids and grandkids. He was also a great friend. Always there to offer advice, encouragement and a compassionate ear to anyone who needed it. Society says a great man is sometimes judged by the wealth he leaves behind. Elton’s wealth cannot be seen, touched or counted but remains in each and every heart that he touched. In our opinion what makes a great person is someone who does good for others. That was Elton Daigrepont. Visitation will be held on Wednesday, November 3, 2021 from 5:00 p.m. to 8:00 p.m. with a rosary to be recited at 6:30 p.m. at Mission Park Funeral Chapels South. Funeral Service will be held on Thursday, November 4, 2021 at 11:00 a.m. at Mission Park Funeral Chapels South. Interment to follow at Mission Burial Park South.

Elton Daigrepont went to be with the Lord on October 28, 2021 at the age of 77. He was born on March 24, 1944 in Cottonport, Louisiana. He is preceded in death by his parents Edwin Daigrepont and Eliska Daigrepont; son David Cervantes; sister... View Obituary & Service Information

The family of Elton Daigrepont created this Life Tributes page to make it easy to share your memories.

Send flowers to the Daigrepont family.