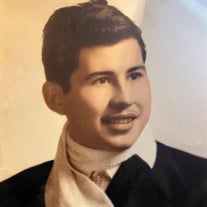 A loving husband, father, grandfather, brother and friend, Eugene P. Gonzalez, Sr. went to be with the Lord on January 7, 2022, at the age of 89. He was born on January 11, 1932 in San Antonio, TX. He is preceded in death by his parents, Jesus and Olivia Gonzalez; son, Daniel Gonzalez and sister, Hortencia Gonzalez Campos. Eugene is survived by his loving wife of 66 years, Martha Ayala Gonzalez; children, Eugene Gonzalez Jr., Zaragosa Gonzalez (Mayte), Norma Gonzalez, David Gonzalez (Julia), Adam Gonzalez and Leticia Gonzalez; sister, Diana Massiatte; 14 grandchildren, Bianca, Zachary, Christopher, Vanessa, Danielle (Francisco), Crystal (Daniel), Michael (Jessica), Jamal, Giovanni, Michelle (Jerry), David Jr., Laura, Amanda and Helina; 21 great-grandchildren; Ethan, Eli, Madison, Christopher Jr., Liliana, Louuana, Elijah, Juliana, Eliana, Adriana, Leila, Kaytlyn, Jaide, Ezekiel, Isaac, Jayden, Kaydence, Noah, Alazeiah, Amanda and Jose Jr.; 3 great-great-grandchildren, Carmen, Carly and Cali; and numerous nieces, nephews and other extended family members and friends. Eugene Gonzalez enjoyed fishing and tending to his land and livestock. He worked from sun up to sun down. He was a very patient man and would sit for hours waiting on a fish to bite. He loved taking road trips to the coast to fish and just spend time alone near the ocean. He was a big family man, he enjoyed having all his grandchildren and children near him. He loved cooking out and making food for everyone on the grill. He was a humble man and everyone one that knew him loved him. He loved his coffee and sweet bread. He was a funny man, and it was rare that you held a conversation with him without laughing at one of his jokes. He was a lighthearted, loving man. He adored the love of his life for 66 years. He was the definition of unconditional love. Eugene served in the armed forces as an infantry man during the Korean War where he was given the Purple Heart for his sacrifice to his country and countrymen. He was a very smart man when he was honorably discharged from the Army, he was one of the first people to start working on computers, he ran and managed computer sites on Kelly Air Force base and he did this without a college degree. He was a self-thought man and he believed in bettering your mind. He could tell you how many minutes were in a year and how many hours in a year and pretty much solve any equation you threw at him. He enjoyed playing dominoes and cards to pass the time and taught all his children how to do the same. He said it was a great way to keep your math skills up. HE will be greatly missed by all that knew him. Visitation will be Tuesday, January 25, 2022 from 5:00 to 8:00 p.m. at Mission Park Funeral Chapels South. Funeral Service will be on Wednesday, January 26, 2022 at 9:00 a.m. at Mission Park South. Interment to follow at Fort Sam Houston National Cemetery at 10:45 a.m.

A loving husband, father, grandfather, brother and friend, Eugene P. Gonzalez, Sr. went to be with the Lord on January 7, 2022, at the age of 89. He was born on January 11, 1932 in San Antonio, TX. He is preceded in death by his parents, Jesus... View Obituary & Service Information

The family of Eugene P. Gonzalez Sr. created this Life Tributes page to make it easy to share your memories.