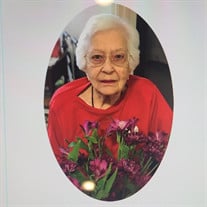 EUNICE MELANIE (GLENEWINKEL) IRWIN Eunice Melanie (Glenewinkel) Irwin entered eternal rest on January 8, 2022, at the age of 97 years after a struggle with Alzheimer's Disease. She was born August 11, 1924, to Harry and Alma (Hagemann) Glenewinkel near Hunter, TX, in Hays County. Eunice graduated from Kingsbury High School in Kingsbury, TX, and after graduation worked in Seguin, TX, at Duke & Ayres variety store. After her sister, Nelda, graduated high school, she and Eunice moved to San Antonio and worked at Fort Sam Houston during World War II. After the war, on June 23, 1946, she married Paul T. (Jack) Irwin at Emmanuel Lutheran Church in Seguin. Their permanent home became San Antonio where Jack was employed by Humble Oil Company, which eventually became Exxon Oil Company. Eunice was a content, busy and happy housewife and mother. Patrick was born 12/17/48 and Cathy 3/1/50. She said she had her hands full! Eunice and Jack were very involved parents with Cub Scouts, baseball, band boosters, PTA, and she was always a room mother. Later, they were Aggie parents and attended many A&M football games. They were active members of Hope Presbyterian Church. When their grandchildren arrived, they always enjoyed spending time with them. She was very proud to pay for her four grandchildren's college educations. Eunice even got to know her four great-granddaughters. She was a great cook and had an enormous garden for years. She canned everything and loved sharing her bounty with family and friends. Jack was a deer hunter! The whole family processed those deer and made wonderful sausage using her father's recipe. When Jack's WWII Navy Ship, the USS Charles Ausburne, started reunions, Jack and Eunice hosted several reunions in San Antonio. They attended every reunion all over the United States and traveled extensively until Jack’s death. Eunice continued attending reunions and enjoyed seeing former shipmates and their wives. Eunice worked on her maternal (Hagemann) family history for many years and published her work for the family. Libraries in Seguin, New Braunfels, and surrounding towns accepted her book, too. Her research was done before computers and Ancestry.com. It was a huge undertaking and really difficult, but she loved it. She said the facts speak for themselves but the family stories bring the ancestors to life. After several falls and surgeries, Eunice moved to Villa de San Antonio assisted living. She was very happy there and made many good friends. Every day she played cards, dominoes, bingo, and whatever else was happening — except happy hour! Not for her. When she needed more assistance, Eunice moved to Honey's House, a wonderful assisted living in Helotes, TX. After a brief adjustment, she settled in and was so cared for there. She loved them, and they loved her. Eunice was a widow for thirty years. A few years ago, out of the blue, she said, “You know, I miss Jack every single day.” With this and her failing health, we know she was ready and is dancing across Heaven with her beloved Jack. This gives us peace. Eunice was preceded in death by her husband, Jack, and her parents; her brother, L Roy; brother-in-law, Harold Ewald; brothers-in-law and sisters-in-law Glen & Ruth Irwin, Jack & Marie (Irwin) Thompson, Lowell (Shortie) & Sybil Irwin; nephew, Bob Irwin. She is survived by her son, Patrick Irwin (Darlene); daughter, Cathy Fahnert (Randy); her grandchildren: Matthew Fahnert (Celeste); Preston Irwin (Alice); Paisley Irwin-Patrick (Sean); Chelsey Irwin; great-granddaughters Izzy, Juliet, Harper and Quinn Fahnert; her beloved sister and best friend, Nelda Ewald; sister-in-law, Marietta Glenewinkel; numerous nephews, nieces, other relatives and friends. Honorary pallbearers are Matthew Fahnert, Preston Irwin, Sean Patrick, Larry Ewald, Bart Ewald, Ronnie Via, and Don Knox. For anyone wishing to make a memorial donation, please consider Boysville. Jack and Eunice supported Boysville for many years. Boysville, Inc, 8555 TX-1604 Loop, Converse, TX 78109. A 1:00 p.m., graveside service will be on Friday, January 14, 2022 at San Geronimo Cemetery in Seguin, TX 78155

The family of Eunice Melanie (Glenewinkel) Irwin created this Life Tributes page to make it easy to share your memories.

Send flowers to the Irwin family.