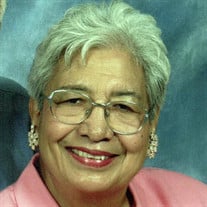 Felice Mauricia Quintero Rodriguez, beloved, wife, mother, grandmother, and great-grandmother entered eternal rest on May 30, 2022, at the age of 91. She was born on October 1, 1930 to Blas M. Quintero and Leonora Enriquez Quintero in San Antonio, Texas. She is preceded in death by her parents, husband, Arthur Salvador Rodriguez Jr., her sister Mary Louise Ritchie, her son Paul Stephen Rodriguez and her grandson Andrew Joseph Rodriguez. She is survived by her children: Arturo “Artie” S. Rodriguez III (Sonia), Frank (Betty), Ray (Carmen), Rick (Delma), Peggy (John) Whittington and Marty (Sylvia); 17 grandchildren; 31 great-grandchildren, sister-in-law Virginia Rodriguez and numerous nieces, nephews, and friends. Felice attended St. Henry’s Catholic School; St. Teresa’s Academy and graduated from Incarnate Word High School in 1948. Felice was an active parent in many school organizations through the years while her children were in school at St. Margaret Mary’s, La Salle High School, St. Gerard, and Providence High School. In 1969, she decided to further her formal education and attended San Antonio College. She spent over 20 years at St. Margaret Mary Catholic School as a teacher’s aide and then taught Kindergarten before retirement. Felice was a devout Catholic and always took time to teach by example. She was an avid gardener who loved to read, sew and shop After high school graduation, she married the love of her life, Arthur Salvador Rodriguez Jr. on Aug. 4, 1948, at St. Cecilia’s Catholic Church in San Antonio, TX. As their family grew, they began their travels by car with all kids in tow to many National Parks across the U.S. and Mexico, and to visit family and friends. Camping was a simple way to spend time together to include many trips to the family ranch. Those travels continued throughout their 64 years of marriage. Family First with God in the front to lead is how they lived their lives. Felice and Arthur prayed the rosary together every night before bedtime. When they couldn’t be together, they would agree on a time they would pray the rosary to ensure they would still be praying together. Felice and Arthur were founding members of St. Margaret Mary’s Church and she was a member of the Altar Society, Eucharistic Ministry and Hospitality Committee. Visitation will be on Wednesday, June 8 at St. Margaret Mary Catholic Church, 1314 Fair Avenue, San Antonio at 7 p.m. followed by a rosary at 7:30 p.m. Mass of the Resurrection will be held on Thursday, June 9 at 10 a.m. at St. Margaret Mary Catholic Church. Interment will follow at San Fernando Cemetery #2. Immediately following the burial, a reception will be held at Holy Name Catholic Church Activity Center, 3814 Nash Blvd. San Antonio, Texas The family wishes to thank the entire staff of St. Francis Nursing Home and Dr. Mark Prange for the compassionate care they provided throughout her journey. In lieu of flowers, donations may be made in Felice’s name by check to St. Francis Nursing Home, 630 W. Woodlawn Ave. San Antonio, TX 78212 or to St. Margaret Mary Catholic Church, 1314 Fair Ave., San Antonio, TX 78223.

Felice Mauricia Quintero Rodriguez, beloved, wife, mother, grandmother, and great-grandmother entered eternal rest on May 30, 2022, at the age of 91. She was born on October 1, 1930 to Blas M. Quintero and Leonora Enriquez Quintero in San Antonio,... View Obituary & Service Information

The family of Felice M. Quintero Rodriguez created this Life Tributes page to make it easy to share your memories.

Send flowers to the Rodriguez family.