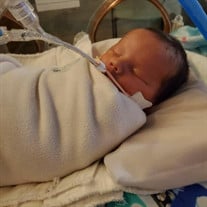 Finnigan Kol Worley left this world on October 29, 2021. Finn was born to Joshua and Meghan Worley on September 27, 2021. He is survived by Grandparents, Kevin and Michelle Dougherty, Jimmie-John Durant, Melissa Ramirez, Luke and Norma Worley, and Maegan and Shaun Drummonds, along with Great Grandparents Verylon and Donna Durant, James and Susie Fisher, Aleda Womack, Steve and Maggie Worley, Kenneth and Grace Womack, Vicki and Bob Short, and Modesta Ramirez. Finn also leaves behind his Great Great Grandmother Virginia Worley and a number of Aunts, Uncles, Cousins, and other extended family. Finnigan was not on this earth for long, but he was loved beyond measure by more people than we can even begin to count. He brought people together, saved the life of another child, and as the smallest organ donor on record in Texas, Finn is a prime example of the adage, “There is no foot too small that it cannot leave an imprint on this world.” We would like to thank the entire team of NICU staff at Methodist Children’s Hospital who worked tirelessly day and night to ensure Finnigan was taken care of as best they could as we all waited with our fingers crossed for the answers that would save our precious little boy. Even though we did not receive the news we hoped for, the doctors, nurses, and support staff on Finnigan’s care team never left his side. We hope that Finn’s story will remain in the hearts of his NICU and transplant teams to remind them everyday that even if the outcome is not what they hoped for, they are still making a difference in the lives of so many.

The family of Finnigan Kol Worley created this Life Tributes page to make it easy to share your memories.

Send flowers to the Worley family.