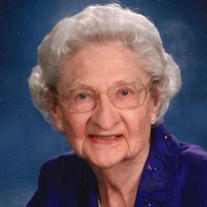 FLOY LAVERNE RUSSELL SUTHERLAND Floy was born October 2, 1922 as the fifth child of William James and Frieda Witte Russell on a small farm in Hamilton County, Texas. She was born at a time when life was simple: work hard, love the Lord and help others. She lived this example through the rest of her life. She became a Christian at an early age and remained so through her 99 years. Being a farm girl with 4 sisters and 2 brothers, Floy worked around the farm doing everything from raising pigs to harvesting grain. She was taught her many skills by both mother and father. Floy graduated from Cranfills Gap High School at sixteen. Being too young to take a business course, she stayed home and helped with the chores, cooking and making quilts. Moving to San Antonio in April 1941, she attended Draughon’s Business College and was hired, prior to graduating, as a secretary at Ft. Sam Houston General Depot. On June 27, 1942, she married Herbert Sutherland and started their family. After the birth of their first child, she dedicated her life to her family. As was the custom at that time, Floy and Herbert shared homes with family members until they could purchase their own home in 1945. Her mother and youngest brother then lived with Floy and Herbert for 9 ½ years before they could buy their own home. Floy always cooked plenty of food. She would be sure her mama and brother were well fed, taking them what she called homemade TV dinners on a regular basis. If someone was there at mealtime, they were always asked to join in. Children were treated to homemade cookies. Floy was an active volunteer and touched the lives of many children. She taught children’s Sunday school and vacation Bible school for 10 years at Palm Heights Methodist Church. Floy continued her service with both Boy Scouts and Girl Scouts. She became very active in PTA holding several offices including: President of Charles Graebner Elementary school PTA (1959-60), President of Lowell Middle school PTA (1963-64) and then became a Life Member of Texas Congress PTA. She was proud to have attended the state convention and served on the San Antonio Council of PTA. She continued being active in PTA at both Luther Burbank and Robert E Lee high schools. In later years, Floy worked fifteen years with the nutrition program and fundraising sales at Asbury Methodist Church. The church recognized and honored her for the many hours of volunteering. When the program was moved to the Church of Christ, she continued her service with bookkeeping and serving in the kitchen. Floy loved having the whole family in her home and especially being around the “little ones”. Floy would help each of her children with their first born using her skills as a mother. Through the years, she would keep her grandchildren whenever called upon. She taught them to play dominoes, board and card games and to work puzzles. Floy started hosting monthly luncheons with her sisters and then later with the nieces and nephews. This was the highlight of her later years. And Floy could cook! She always made sure each of us had our favorite dessert for a birthday, special occasion or when we’d go to visit. Her specialties were her desserts, cookies and candies. Floy always had special requests for her peach cobbler, meringue or pecan pies, German Chocolate Cake, iced holiday cookies, divinity candy and many others. She could even take plain cake and make it special by pouring warm chocolate icing over it. She would often surprise us with her homemade rolls or deviled eggs. Floy was always willing to share recipes and shared many over the years. Quilting was Floy’s passion. Beginning as a young girl, Floy made over 100 handmade quilts. She continued to quilt through her 97th year giving quilts to each of her children, grandchildren and great grandchildren. During her later years, Floy wanted her family to know about her life. She spent many hours remembering and writing her memoirs. She was grateful to have lived such a long and wonderful life and was so proud of each and every one of her family. Floy also loved to travel. She visited friends and relative all over the United States. She once commented that she never thought she would see so much. Some of her favorite places were Niagara Falls, Toronto, Las Vegas, Washington DC, the Hoover Dam, Grand Canyon, New Orleans, Branson, Georgia and California. The Lord called her home on November 15, 2021 at age 99. Floy was preceded in death by her husband of 67 years (Herbert), son-in-law John Seay and daughter-in-law Vicki Sutherland. Floy is survived by her children, Herb (Vivian) Sutherland, Sandra (Edward) Morrissey, Karen Seay and Mark (Angela) Sutherland, 7 grandchildren, 8 great grandchildren and numerous nieces, nephews and friends. In lieu of flowers, donations may be made to St. Jude Children’s Research Hospital.

FLOY LAVERNE RUSSELL SUTHERLAND Floy was born October 2, 1922 as the fifth child of William James and Frieda Witte Russell on a small farm in Hamilton County, Texas. She was born at a time when life was simple: work hard, love the Lord and... View Obituary & Service Information

The family of Floy Sutherland created this Life Tributes page to make it easy to share your memories.

Send flowers to the Sutherland family.