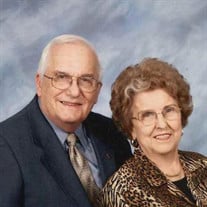 Frances Marie Boehme Lee, devoted Wife, Mother, Gran and Great-Gran, went to be with our Lord on Monday, the 24th of January 2022, with her sons by her side, one week after celebrating her 92nd birthday. Born on the 17th of January 1930, in San Antonio, Texas, she is survived by three of her sons; Bob Lee, Jr. (Karen); Ron Lee (Shirley); and Greg Lee (Ginger). Frances was a Loving Gran to Jeanette Driffill (Steve), Erin Hobbs (Thomas), Chad Lee (Kristine), Morgen Lee, Shelly Zawadzki (Lance), and Grace Lee; and a loving Great-Gran to Drew and Reese Driffill, Maggie Hobbs, Kenzie and Aubree Lee, and Tate and Hays Zawadzki. Frances is also survived by her brother, Donald Boehme, and numerous nieces and nephews. Frances was preceded in death by her Husband of 67 years, Robert E. (Bob) Lee; their son, William (Bill) Lee; Grandson, Robert Austin Lee and Parents, William Edward (Bill) and Isabell Marie Haby Boehme. Frances was born on a freezing day at Santa Rosa Hospital and hated being cold ever since. She lived and grew up in the Rio Medina and Castroville, Texas areas attending elementary school in Rio Medina. She graduated from Castroville’s St. Louis Catholic High School in 1948 where she was the school’s first drum major. She was a fan of the local men’s baseball team the Rio Medina Tigers and enjoyed playing on the women’s softball team the Rio Medina Red Chicks. Frances always rooted for whichever team was playing against those darn NY Yankees. She continued her education with the Sisters of Divine Providence while attending Our Lady of the Lake College as a dorm resident. After college, Frances and some of her lifelong girlfriends worked for SW Bell Telephone while living at the nearby YWCA. She spoke and understand her ancestor’s Alsatian language - especially when she didn’t want her young sons to know what she was talking about! While attending the local dances with her many cousins and friends in the Castroville area, Frances met “Robert E.” who was then a member of the Melody Kids dance band. Frances and Bob were married two days after Christmas, 1952, at St Louis Catholic Church, Castroville, Texas and then moved to their first home, Patrick AFB, Cocoa Beach, Florida where Bob’s service in the Air Force extended through 1955. After short stays in Kingsville and Brownsville, Texas, Frances and Bob came back to San Antonio in 1958 to raise their four sons and built what was to be their home for the next 60 + years. Frances is a former member of St. Gregory the Great Catholic Church, where she and Bob belonged to the St. Blaise Family Guild. She lovingly and tirelessly guided, supported and encouraged her sons’ religious education as well as all their sport, band and scout activities at St. Gregory’s Catholic School. It was through her involvement with all these school activities that she came to admire and appreciate the devotion of the Presentation Sisters who taught at the school. Later Frances and Bob were founding members of St. Matthews Catholic Church, where Frances continued to encourage her sons’ faith and supported their school and scout activities. Frances served as a Eucharistic Minister and in her later years enjoyed being a very active member of the VIP Club at St. Matthews. She was a big fan of the Winston Churchill High School Chargers well after her sons had completed their school, sport and band activities. Frances enjoyed attending football games at Texas A & M in her younger days and became an even bigger fan when three of her grandchildren became Aggie graduates. Frances and Bob stayed busy during their retirement years and enjoyed attending Air Force reunions and all their grandchildren's athletic and school activities. For many years Frances was able to enjoy working a daily crossword puzzle, watching the Jeopardy game show, playing bunco with her “Dirty Dozen” girlfriends, monthly birthday dinners with Bob’s former co-workers at ERT and frequent family gatherings at the Boehme-Lee ranch at which she helped host the annual Boy Scout campouts for 54 consecutive years. Frances practiced and lived her Catholic faith all her life. She taught her sons and grandchildren to always treat people as you would like to be treated. She lost her vision the last years of her life but not her spirit and quick wit. She was still the go-to person for any family history. We will treasure her memory and the memories. We celebrate, and are grateful for, her life and we are happy that she now knows where she is, reunited with the family and dear friends that preceded her, and she can now see her newest great grandchildren. The family would like to sincerely thank the many caregivers, nurses and doctors at The Etta (formerly Brookdale) at Shavano Park, WellMed Bridges Palliative Care and Compassus Hospice that cared for Frances during these last few years. The Rosary will be recited starting at 9:30 AM, and a funeral Mass celebrated thereafter at 10:00 AM, on Monday, February 7, 2022 at St. Matthew’s Catholic Church, 10703 Wurzbach Road, San Antonio, TX through Mission Park Funeral (Cherry Ridge) with interment following at Mission Park Cemetery-Dominion at 20900 I-10 West, San Antonio, TX Pallbearers will be Chad Lee, Michael Boehme, Gerard Boehme, Mike Harris, Wayne Katz, Steve Driffill, Lance Zawadzki and Thomas Hobbs. In lieu of flowers, if desired donations can be made in Frances’ name to the Presentation Sisters located at 2926 Dusseldorf, San Antonio, Texas 78230-2878.

Frances Marie Boehme Lee, devoted Wife, Mother, Gran and Great-Gran, went to be with our Lord on Monday, the 24th of January 2022, with her sons by her side, one week after celebrating her 92nd birthday. Born on the 17th of January 1930, in... View Obituary & Service Information

The family of Frances Marie Boehme Lee created this Life Tributes page to make it easy to share your memories.

Send flowers to the Lee family.