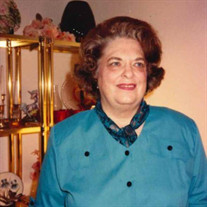 Frances Marion Browder McMahon died in the early hours of December 7, 2021. It appears she died peacefully. She had been ill with advancing dementia for the last 3-4 years and had been in a gradual decline in strength and awareness. Frances was born May 12, 1932 to Hazel Todd Browder and Francis Marian Browder in Houston, Texas. Her younger childhood years were spent in Houston before and during World War II. At the end of the War, military production was cut off at the Ford plant where her father worked and they moved to Austin, Texas where they built a house on the land owned by Hazel’s Mother, Carrie Todd, which was “next door” to Hazel’s Brother, John Todd, and his wife, Alva Todd and their daughter Janette Todd. John Todd ran a Dairy Farm on his mother’s land. Her Cousin Janette was Frances’ age and the two became life-long friends and graduated together from Austin High School in 1950. Frances earned membership in The National Honor Society before graduation. Frances then attended the University of Texas (UT) one year (1950-1951) studying Interior Decorating. Although it was only a short time at UT the course she took proved to aid her in her oil painting hobby. She then took a job with the State of Texas and on March 29, 1952 she married William (Bill) A. McMahon, Jr. The couple remained in Austin for the next year and a half until Bill earned his degree from UT and then moved to Pensacola, Florida where Bill worked his first job after graduation. They spent 3+ years in Pensacola and in the fall of 1956 they, with their two boys born in Pensacola, returned to Texas (San Antonio) where they have remained there to this day. Frances, and her family, were faithful member of St. Mark’s United Methodist church in San Antonio, TX. Frances was very active in raising her family and was a member of the Methodist Women and participated in a number of church activities. When the boys were young she served as a Den Mother when they were in the Cub Scouts. Frances was a gifted artist and painted with oil paints and also acrylic paints on canvas. Eventually she got into painting ceramics before and after “Firing” (turning formed clay figures into ceramic objects). She was very good with this and has left a number of lasting “mementos” for her family which includes oil paintings and ceramic figures, plates and vases. Frances also participated in two church lady produced plays, in which the ladies of the church performed as amateur actresses which was well received by church members. Later, she continued her “Ham activities” by dressing up as a witch and as “Priscilla Pumpkin” when the church ladies entertained young school children who visited the Church’s Pumpkin Patch, where the church sold pumpkins grown by Indian Tribes in NM, on commission, as a fund raising project. Frances enjoyed these activities very much. Frances is survived by her husband: William (Bill) Alvin McMahon, Jr. , Brother ; Jim Hood Browder and his wife , Madelyn Lyerley Browder and two sons, Son: Steven William McMahon and wife Diana Ramirez McMahon, Son: Mark Todd McMahon, Granddaughter: Leah Ann McMahon and wife Jaci Piel, Grandsons Keith Steven McMahon and Craig Joshua McMahon and daughter, Great-Granddaughter: Scarlett Ava Ryleigh McMahon, Great Grandson: Miko McMahon-Piel, Nieces: Morgan Browder and Grace Browder, Nephews: Zachary Browder, Paul Browder and many, many cousins. Frances was a great and loving Wife, Sister, Mother, Grandmother, Great-Grandmother, Aunt and Cousin. She is loved by all and memories of her will never be forgotten. We will miss her here, but will look forward to be united with her in Heaven.

Frances Marion Browder McMahon died in the early hours of December 7, 2021. It appears she died peacefully. She had been ill with advancing dementia for the last 3-4 years and had been in a gradual decline in strength and awareness. Frances... View Obituary & Service Information

The family of Frances Marion McMahon created this Life Tributes page to make it easy to share your memories.

Send flowers to the McMahon family.