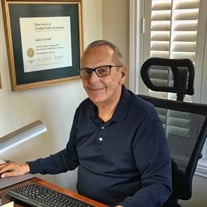 The family of Gerald (Jerry) J. Horvath mourns his passing, but remains inspired by his love of life. He remained active, sharp-witted, kind and caring until his last days. Jerry was born in 1941 in Cleveland, Ohio to Joseph L. and Irene (Brndiar) Horvath. His family moved to Detroit, Michigan, where he lived for ten years. His mother passed away on Easter Day when he was eleven years old, after which time his father married his stepmother Virginia and returned to Cleveland, Ohio. Before beginning his freshman year, his family moved to Pittsburgh, Pennsylvania where he graduated from Dormant High School. He attended Penn State University, playing saxophone and clarinet for the Penn State Marching Band, and obtained B.S. in Business Administration. He obtained a Master of Business Administration from New York University. He married Joanne Rose Schrott and together they had two children. He had a brief second marriage. Because the third time’s a charm, he found a lasting partnership with Patricia Johnson, creating an active blended family, including her four children, their spouses, and thirteen grandchildren. They enjoyed anything and everything family-oriented, celebrating the birth of each new grandchild, hosting numerous baby showers, and attending their grandchildren’s extracurricular activities. They enjoyed beach trips to Galveston, visits to New Orleans, and to see family and friends in Kansas and North Carolina. He was fortunate to find some of his most meaningful friendships with the many residents of The Franklin Park at Alamo Heights, including Suzanne Bomar, who remained by his side until his passing. Jerry had an appreciation for the value of a dollar at an early age, having operated a paper route beginning at the age of eleven. He became an accomplished CPA, and began his professional accounting career working for General Foods and Corporation in White Plains, New York, and San Francisco, California. In 1973, he began work in the corporate offices of Church’s Fried Chicken, and moved the family to San Antonio. His experience fostered a specialty in restaurant accounting, where he provided guidance and assistance during the development and operation of several notable San Antonio restaurants, including Mama’s and Mama’s Café’, the Water Street Oyster Bar, and multiple Pizza Hut franchises. He taught the Becker CPA Review to decades of accounting students and professionals seeking to become certified public accountants. He patiently and considerately assisted numerous individuals, families and businesses with their financial and tax questions, valuing the confidence that each client and friend entrusted in him. He enjoyed many hobbies throughout his life, including scuba diving, motorcycle riding, pipe smoking, pool playing, chess, fixing up his rental houses, and was a mean Yahtzee player. Until his final days, he enjoyed playing the saxophone, working on his model train sets, and dining and drinking with his friends at The Franklin. We will miss his joyous laugh, wise counsel, and patient guidance. He is survived by his two children: Lisa Horvath Shub (Ben), and Douglas J. Horvath (Jennifer); his four stepchildren Will Johnson (Deborah), Kevin Johnson (Negar), Mary-Margaret Howard (John) and Jim Johnson; and 13 grandchildren: Laura Rose Shub, Allison Leigh Shub, Madeline Jade Horvath, Genevieve Amber Horvath, Parker Johnson, Nate Johnson, Lynda Katherine Johnson, Sofia Johnson, Olivia Johnson, Hannah Jeanne Howard, Hailey Pauline Howard, McGuire Johnson and Addison Johnson. He is predeceased by his parents, his sister Carole Sue Horvath, his wife Patricia Johnson, and son Bradley Charles Horvath. A memorial service will be held on Saturday, September 25 at 1:00 p.m. at Mission Park Funeral Chapels North, 3401 Cherry Ridge S.A., TX. Interment to follow in Mission Burial Park North, 20900 IH10 West S.A., TX. 78257. In lieu of flowers donations may be made to the National Kidney Foundation at www.kidney.org

The family of Gerald (Jerry) J. Horvath mourns his passing, but remains inspired by his love of life. He remained active, sharp-witted, kind and caring until his last days. Jerry was born in 1941 in Cleveland, Ohio to Joseph L. and Irene (Brndiar)... View Obituary & Service Information

The family of Gerald J. Horvath created this Life Tributes page to make it easy to share your memories.

The family of Gerald (Jerry) J. Horvath mourns his passing, but...

Send flowers to the Horvath family.