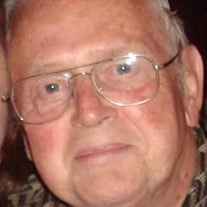 Harry William Dolan, Jr., “Bill” to family and friends, "Buddy" back home in Winchester, VA, and his favorite, "Daddy Bill'' as he was known to his grandchildren and great grandchildren, was a loving and dedicated family man and patriot. Bill joined the Air Force at the young age of 17 in the fall of 1953, after convincing his mother to sign his enlistment papers. Throughout his 20 plus years of service, he was stationed in many different states, Okinawa, England and Vietnam, and earned many accolades and awards, including the Air Force Commendation Medal. Bill met many people during his service, including his beloved wife of 64 years, Susana Saenz. After their marriage in 1957, Bill became a father to three children, Cynthia Dolan Hunter, Robert Dolan and Patricia Dolan Bouressa. His legacy continues in them as well as in his grand- daughters, Meagan Turnage and Paige Hunter, and his cherished great grandbabies Katherine Mae Turnage and Hunter Staige Turnage, who was named after his own paternal grandfather. Bill's many interests included numismatics (coin collecting), antiques, nature, country music, and history. However, he was always most interested in people. His love of people and their stories helped him turn strangers into friends wherever he went. He created a network of friends and family, both immediate and extended, that will always remember his generosity, kindness and wonderful stories. He is survived by his wife, three children, two granddaughters, two great grandchildren, his sister Mary Jane Dolan, and many nieces and nephews. To honor his memory, the family is requesting donations be made to two of Bill's favorite charities, UT Health San Antonio MD Anderson Cancer Center (https://makelivesbetter.uthscsa.edu/cancercenterdonate) or Saint Bonaventure Indian Mission & School (www.St.BonaventureMission.org).

Harry William Dolan, Jr., &#8220;Bill&#8221; to family and friends, "Buddy" back home in Winchester, VA, and his favorite, "Daddy Bill'' as he was known to his grandchildren and great grandchildren, was a loving and dedicated family man and... View Obituary & Service Information

The family of Harry William Dolan Jr. created this Life Tributes page to make it easy to share your memories.