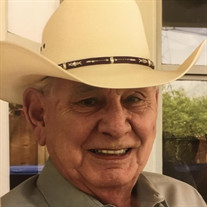 Humberto F. (Goody) Gutierrez born July 19, 1931 was called home on September 14, 2021 at the age of 90. He was preceded in death by his loving wife of 43 years, Wilma M Gutierrez on February 7, 1994. Also preceding him in death; his parents Zaragoza and Maria Gutierrez; brothers Homero, Eloy and Laurence Gutierrez and sister Carmela G. Ayala. He is survived by his loving children, Chris Gutierrez (Brenda), Mary Ellen Luna (Louie), Robert Gutierrez (Cheryl), Margie Aleman (Rafael), and David Gutierrez (Sandy), brothers, Zaragoza Gutierrez (Belinda), Baldemar Gutierrez (Laura), sisters, Aurora Canales (Ruperto) and Hortencia G. Garcia, 5 grandchildren, 5 great grandchildren, several step-grandchildren, step great grandchildren and 1 step-great great grandchild, and loving companion Angelica (Dolly) Mendiola and numerous nieces, nephews and friends. Humberto retired from Kelly AFB as a Criminal Investigator after 33 years of service. He was a member of the Kelly Rod and Gun Club where he and the team participated in many competitions throughout the United States, always coming home with several trophies. He had a love for the outdoors which included fishing and hunting.He was an avid hunter and enjoyed many hunting trips throughout South Texas and Colorado with his sons and brothers. He continued trips to the deer lease until he was 88 years old. Humberto was a member of St Leonard’s Catholic Church where he was a member of the Knights of Columbus (4th Degree), and an usher for over 20 years at the 10:00am Sunday Mass until his declining health made it no longer possible. The family would like to thank Christus Santa Rosa Hospice, especially nurses Kristen and Peggy, CNA Joyce and Chaplain Don. Visitation will be Wednesday, September 22, 2021 from 5:00 to 8:00 p.m. at Mission Park Funeral Chapels South, with a Rosary Service to be recited at 6:30 p.m. A Funeral Procession will depart Mission Park Funeral Chapels at 1:30 p.m. for a 2:00 p.m. Funeral Mass at St. Leonard Catholic Church. Interment to follow at Mission Burial Park South.

The family of Humberto Gutierrez created this Life Tributes page to make it easy to share your memories.

Send flowers to the Gutierrez family.