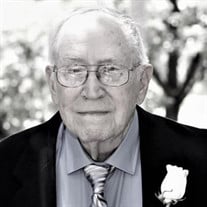 Jack Glendon Jones, 98, of San Antonio, Texas, peacefully passed away at home on August 25th, 2021, after a valiant battle with the Covid Delta Variant Virus. He was generous, kind, humorous and sharp witted his entire life. Jack was born on November 13, 1922 to Scott and Ollie Dean Jones in Midlothian, Texas. As a child, Jack would get up early before anyone else, go to the front porch and look out over the fields of cotton and farmland. He remembered hunting and exploring nature. The family moved from Midlothian to Paris, Texas where he went swimming in Lake Paris and hunted in the woods. His family (parents, brother, and grand-parents) moved from Paris to Cleburne, Texas where he had a wonderful childhood; he made many friends, played with his dog Pete, played baseball, and learned to play the harmonica and mandolin. He and his brother sang and played on the radio and in stage shows and would “bring down the house.” His family left Cleburne for Fort Worth, Texas where he graduated from Arlington Heights High School. After high school graduation, with World War II eminent, Jack enlisted in the U.S. Army Air Corps at Fort Sam Houston in San Antonio, Texas in February 1941. As a gunner and radio operator with the Army Air Corps, his missions took him to many destinations including Central and South America, Northern Africa, and Western Europe. His last mission was aborted as WWII was declared over. Jack had already set goals for the next part of his life. His priority was a higher education; then a job, marriage, and children and that’s exactly what he did. He attended the University of Texas at Austin and received a Bachelor of Arts in Business in two years and continued graduate study in Law, Economics, Banking and Finance. Jack met Helen H. (Sue) Herman in Austin and they married in May 1949. Jack and Sue went on to have three children, Cynthia Sue, Teresa Dean, and Jack Timothy Jones. The family moved from Austin to Victoria and eventually settled in San Antonio where Jack went to work for the Social Security Administration. In retirement, Jack became a real estate broker, played lots of golf (which was a lifelong love for him and his father) and lovingly cared for his wife who had suffered from dementia for several years. Jack was predeceased by his father Scott Jones, his mother Ollie Dean Jones, his brother Scott D. Jones, his wife Helen (Sue) Jones and his son Jack Timothy Jones. He is survived by daughters Cynthia Jones Miller and Teresa Jones Avini, grandchildren Robert Grey Miller, Emily Morgan Miller, Ayesheh Avini, Majeed Timothy Avini, Mitrah Elizabeth Avini and great grandchild Teresa Mary Avini. Services will be held at Fort Sam Houston National Cemetery on October 29th, 2021, at 11:00 am. In lieu of flowers, please consider a donation to a charitable organization of your choice.

Jack Glendon Jones, 98, of San Antonio, Texas, peacefully passed away at home on August 25th, 2021, after a valiant battle with the Covid Delta Variant Virus. He was generous, kind, humorous and sharp witted his entire life. Jack was born on... View Obituary & Service Information

The family of Jack Glendon Jones created this Life Tributes page to make it easy to share your memories.

Send flowers to the Jones family.