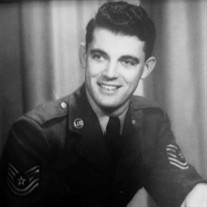 Jackson Burnette Phillips, Jr., age 91, of San Antonio, Texas, left the kingdom of this world and entered the Kingdom of Heaven on September 24, 2021, at his home, after six months of hospice care there. Jack was born on August 9, 1930 in Blytheville, Arkansas, the son of Jackson Phillips and Mary Aileen Moore, and the eldest of seven children. Jack joined the Air Force, where he served for 22 years, chiefly in finance. When he graduated from Advanced Finance School at 19, he was both the youngest and the highest ranking in his class. He was stationed at many bases in the U.S., as well as overseas in Panama, Greenland and Turkey. While in the Air Force, he married Billie Sudberry with whom he had three daughters. He also earned three Air Force Commendation Medals. In later years, he said he could not remember what the medals were for; he was always prouder of his three daughters. After retiring from the Air Force in 1967, he attended St. Mary's University, graduating summa cum laude in Business in 1974. He subsequently served as chief financial officer of both the Perry Shankle Company and Texace. While at Texace he fell in love with Linda Gonzales, to whom he was happily married for over 30 years. Together, they enjoyed going on cruises, watching golf and basketball, supporting San Antonio teams, and helping raise money for good causes like the Optimists’ Club, where Jack often ran the annual Christmas Tree Lots. Jack and Linda were longtime members of Zion Lutheran Church, where Jack served as Deacon. Jack was preceded in death by his sister, Jean LaNelle (Bill) Davidson, and brothers Donald, Charles (Louise), Bill (Sue) and Tommy (Sue) Phillips. He is survived by his beloved wife Linda Phillips and his youngest brother, Ed (Mary Margaret) Moore. Also surviving him are his daughters Kim (Thomas) Flowers, Sally (James) Cuda, and Mary (Monty Douglas) Phillips, four granddaughters (Tonya, Megan, Hannah and Shannon), one grandson (Chris), and two great-grandsons (Mikhail and Marcel), and many nieces and nephews. His devoted cousin Robbie Wade Certain and her husband Rev. Dr. Robert Certain (Col., USAF Ret.) are very special friends who also survive him. The visitation will be at Mission Park Funeral Chapel, 3401 Cherry Ridge in San Antonio, on Thursday, September 30, 2021 from 7pm to 9pm. A memorial will be observed at 2pm on Saturday, October 9, 2021 at Shepherd King Lutheran Church (Rhapsody Dr., San Antonio). Burial will be at Ft. Sam Houston National Cemetery on Wednesday, October 13, 2021 at 9:30am. Pastor Kris Hill will preside at both services. The family wishes to thank very special caregivers Isabelle Juarez, Eugene Ramon and Tanislado (JR) Sandoval, whose presence brightened his last weeks.

Jackson Burnette Phillips, Jr., age 91, of San Antonio, Texas, left the kingdom of this world and entered the Kingdom of Heaven on September 24, 2021, at his home, after six months of hospice care there. Jack was born on August 9, 1930 in... View Obituary & Service Information

The family of SMSGT Jackson Burnette Phillips, Jr. USAF (Ret.) created this Life Tributes page to make it easy to share your memories.