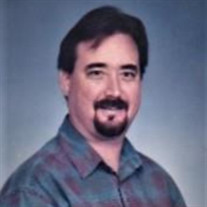 James Beau Morris, 60, of San Antonio, Texas, passed from this life on Sunday, August 29, 2021. Beau was born June 23, 1961 at the US Army Hospital, Sandia Base, in Albuquerque, New Mexico to Michael and Linda Morris (nee Darr). Most of Beau’s life was spent in Texas. As a child, he lived in many places in Texas and this fostered his love of travel. After attending high school in Del Rio, Texas, he left to see the United States, working all over the western part of the country in the oil industry. He decided that San Antonio was his home and moved there in the late 1980s and never left. He worked in a variety of jobs, but found his passion in film production, where he was a camera operator. In addition to city council meetings, military training films, and the occasional wedding, Beau also was behind the camera for many televised San Antonio Spurs games. Within a few years, Beau met his wife and best friend, Milissa Alvarado. After a memorable first date, they decided they were made for each other and spent the next sixteen years together, traveling to their favorite beaches, camping grounds, and outings with their dogs. Some of their favorite times together involved simple nights on their back deck, just enjoying nature. Beau rarely met someone he didn’t like. He had a curious nature and wanted to know about other people and their lives. He had a quick wit and true to his nature, had lifelong friendships. Beau enjoyed film studies, heavy metal music, and cooking shows. He loved all types of foods and would have made an excellent food channel host. In his later years, Beau’s health began to suffer as he battled life long kidney disease. He became more home-bound, but he never lost his spirit, his sense of humor, and his love of life. Beau is survived by his wife, Milissa Alvarado; mother, Linda Morris; sister, Leslie Morris; brother-in-law, Estevan Alvarado III and wife Patricia; nephew, Luis Alvarado; and numerous aunts, uncles, and cousins. He was preceded in death by his father, Michael Morris; and his mother and father-in-law, Eloisa and Estevan Alvarado, Jr. The family would like to thank the staff at Fresenius Kidney Care Southeast San Antonio and to Dr. Lisa Cabrera for the level of care and kindness shown to Beau. Their dedication to his health went above and beyond. We are forever grateful. A Celebration of His Life will be held at Dellcrest Funeral Home Chapel on Sunday October 3, 2021 at 11:00 a.m. In lieu of flowers, donations may be sent to the National Kidney Foundation.

The family of James Beau Morris created this Life Tributes page to make it easy to share your memories.

James Beau Morris, 60, of San Antonio, Texas, passed from this...

Send flowers to the Morris family.