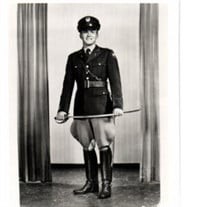 Colonel James R. (Jim) Compton, US Army (Retired), died peacefully on January 30, 2022. He spent his life serving God, country and family with faithfulness, honor and love. He was born near Lipan, TX on April 22, 1932, the son of Ira and Josie Compton. He graduated from Lipan High School (valedictorian) in 1949 and earned a BS degree from Texas A&M University (1953) and a master’s degree from the University of Oklahoma (1976). He was a graduate of the Army War College, the Army Command and General Staff College, the National Defense University, and a host of other military schools. He spent 32 years in the active Army and the US Army Reserve. During the Vietnam War era, he was chief of recruiting for Hdqs., Fifth US Army, Fort Sam Houston, TX. He completed his USAR service in 1983 as commander of the 353d Civil Affairs Command in New York City. His military service took him to assignments across the US, in Europe and in Latin America. He received the Legion of Merit twice, as well as a number of other awards and commendations. In his 42-year career, he was a newspaper reporter/editor, a technical writer/editor, and a long-time public relations communicator/director. He worked for the Grumman Aerospace Corp. Research Dept. on Long Island for 15 years, and was Director of Communications for 12 years at Southwest Research Institute in San Antonio. He was national president of the Army Civil Affairs Association in 1986 and president of the San Antonio Public Relations Society in 1987. He is survived by his loving wife of 47 years, Gaylene; five children, Kerry Compton (Berthoud, CO.), Kimberly Lovelace (Denver, CO.), Keith Compton (Longmont, CO.), Michael Murphy (Brookfield, WI.) and Julie Trautman (Comfort, TX.), grandchildren and great-grandchildren. He is preceded in death by his parents, brother Billie Joe Compton (a Marine killed at Iwo Jima) and sister Mary Earl Cole (Mineral Wells, TX.). A memorial service is scheduled for 11:00 a.m. on March 1st, at Mission Park Chapel, 3401 Cherry Ridge, San Antonio, TX. Burial will follow with full military honors at Fort Sam Houston National Cemetery at 1:00 p.m. The family would like to thank Embrace Hospice and Gracious Living Personal Care Home in Boerne for their excellent care during the last days of Jim’s life.

Colonel James R. (Jim) Compton, US Army (Retired), died peacefully on January 30, 2022. He spent his life serving God, country and family with faithfulness, honor and love. He was born near Lipan, TX on April 22, 1932, the son of Ira... View Obituary & Service Information

The family of Colonel James R. (Jim) Compton, US Army (Retired) created this Life Tributes page to make it easy to share your memories.

Send flowers to the Compton, US Army family.