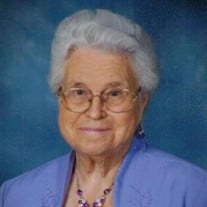 Jean Marie Conner Vance passed away from this earth on March 13, 2022 at the age of 92 years. She was born August 4, 1929 in Hamilton, Texas to Amber and John S. Conner, Sr., their fifth child and only girl. Jean spent her younger years in Richland Springs, moving to San Antonio in 1942, where she attended Hawthorne Junior High and Breckenridge High School, graduating in 1947. While on a trip to visit her oldest brother in Ohio, Jean met the love of her life, Lindy C. Vance of Wilmington on one Sunday at the First Baptist Church. They married on November 20, 1947 in San Antonio and would spend 64 years together before Lindy’s passing in 2001. Soon after marrying, Jean and Lindy moved to Wilmington to farm on the Vance family farm. During this time their first child, Sharon Lynn was born in February 1950. Soon after they made the decision farm life was not for them and returned to Texas to build their forever home. In December 1955 their second child, Amy Susann was born, with third, Linden Keith, arriving in November 1958. Jean was a long-time member of Highlands Hill Baptist Church and would faithfully serve for 48 years and continued to serve the Lord with her membership at Baptist Temple Church. Jean was preceded in death by her husband, Lindy C. Vance, daughter Sharon Lee, son-in-law, Howard Lee, her brothers and sisters-in-law, Alva and Hazel Conner, Clyde and Lorena Conner, Leonard and Lola Conner, and John S. and Bobbye Conner. Surviving Jean are her daughter, Amy and husband Trevis Otey, her son Keith and wife Pam, her grandchildren Christopher Lee and wife Terri, Heather (Lee) and husband John Fisher, Amber (Otey) and husband Michael Slaughter, Trey Otey, Nicole (Vance) and husband Tim Blount, her great-grandchildren Shaylynn Fisher, Zachry Fisher, Brennan Slaughter, Evelyn Slaughter, Jackson Slaughter, and Nolan Slaughter, and a host of nieces, nephews and friends. There will be a visitation with family and friends Sunday, March 20, 2022 from 5:00 p.m. – 8:00 p.m. at Mission Park Funeral Chapel South (1700 SE Military Dr., San Antonio, TX 78214), and funeral service Monday, March 21, 2022, 11:00 a.m. at Baptist Temple Church (901 E. Drexel Ave., San Antonio, TX 78210). Interment to follow at Mission Burial Park South.

Jean Marie Conner Vance passed away from this earth on March 13, 2022 at the age of 92 years. She was born August 4, 1929 in Hamilton, Texas to Amber and John S. Conner, Sr., their fifth child and only girl. Jean spent her younger years in Richland... View Obituary & Service Information

The family of Jean Conner Vance created this Life Tributes page to make it easy to share your memories.

Jean Marie Conner Vance passed away from this earth on March...

Send flowers to the Vance family.