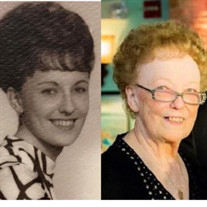 Joan Mary Dickey went to be with our Lord on the afternoon of March 8, 2022 in San Antonio, Texas. She was born on September 1, 1939, in Milford, Connecticut to Henry and Marie Steinmeier. She lived in Milford until her parents, great-grandmother Mary and herself moved to Dallas, Texas in 1949. Joan graduated from Our Lady of Good Council High School in 1957. She attended college at Southern Methodist University graduating with a Bachelor of Liberal Arts and teaching certification in 1961. She was a member of Alpha Delta Pi Sorority. She continued her education by attending Laredo College where she received her Masters Degree in Education and Administration. Joan was blessed with two children, Beth Dickey and Robert Dickey. Joan began her teaching career at Mary Help of Christians School in Laredo, Texas. In 1974, she began teaching for the United Independent School District. Her dedication to the education of several generations of Laredo families saw her teaching at Mary Help of Christians School, Nye Elementary School, Clark middle School, Newman Elementary, and Amparo Gutierrez Elementary School. She also served as an assistant principal and a curriculum specialist before retiring in 2009. She had a passion for teaching and helping children reach their full potential for success in life. Throughout her career she made many lifelong friends. She enjoyed spending her days with extended family, puzzles, reading, and playing cards. She was a lifelong fan of the San Antonio Spurs. Joan is preceded in death by her parents, Henry and Marie Steinmeier; her great-grandmother Mary Steinmeier; her son, Robert Dickey; and her best friend Wanda Edwards. She is survived by her daughter and son-in-law, Beth and Rick Garza; grandsons, Ryan Lundgren, Christopher Lundgren, and Michael Lundgren; daughter of the heart, Dana Hamilton and family; and numerous friends. Joan will be remembered for her style, grace, kindness, and dedication. A Graveside Service will be held on Monday, March 14, 2022 at 1 p.m., at the Mission Park Chapels & Cemeteries, 1700 S.E. Military Dr., San Antonio, Texas. Memorials to honor Joan’s memory can be made to the Christian Youth Theater (CYT), 1389 Industrial St, New Braunfels, Texas 78130 (www.cytsanantonio.org - In memory of Joan Dickey) or to the charity of one’s choice.

Joan Mary Dickey went to be with our Lord on the afternoon of March 8, 2022 in San Antonio, Texas. She was born on September 1, 1939, in Milford, Connecticut to Henry and Marie Steinmeier. She lived in Milford until her parents, great-grandmother... View Obituary & Service Information

The family of Joan Mary Dickey created this Life Tributes page to make it easy to share your memories.

Joan Mary Dickey went to be with our Lord on the afternoon of...

Send flowers to the Dickey family.