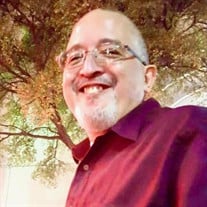 A loving husband, brother, uncle and friend, Joe M. Medina went to be with the Lord on October 4, 2021, at the age of 59. He was born on September 24, 1962 in San Antonio, TX. He is preceded in death by his parents, Jesus Medina and Cecilia R. DeSoto; brother, Jesse W. De Soto and brother-in-law, Moses Escobedo. Joe is survived by his loving wife of 21 years, Lupita Palomo Medina; in-laws, Fernando and Patricia Palomo; siblings, Guadalupe C. Medina and Rosalinda Escobedo; his sister/cousins, Virginia Mendez (Juan) and Irene Resendez (Robert); brothers-in-law, Joe Frank Palomo (Shannon) and Simon Palomo (Ana); his loving dog, BOSS, and numerous nieces, nephews, great-nieces, great-nephews, aunts, uncles, God children, cousins and friends. Joe began working with now Christus Santa Rosa and then the Downtown Baptist hospital. From there Joe worked for SAISD for 39 years. He started at the old Jeff Davis Middle School which turned into C.C. Ball Intermediate. Later that became Henry A. Carroll Elementary School where he met the love of his life Lupita. He would later go to work at Frederick Douglass Elementary School and finally S. H. Gates Elementary School. He truly enjoyed what he did. He always said that he cleaned for his kids. The kids were his “bosses”. He loved his school. When he wasn’t watching a Texans football game or Spurs basketball game, he enjoyed spending time in Bandera, TX. There he would bbq and blast all kinds of music for the whole world to hear. Joe loved all kinds of music. Most of all he enjoyed going for train rides at the zoo. He never needed an excuse to go. If you ever met him, you instantly became a friend, even more so over a beer. Visitation will be Saturday, October 16th from 5:00 to 8:00 p.m. with a Rosary to be recited at 6:00 p.m. at Mission Park Funeral Chapels South. Visitation will also be open on Sunday, October 17th from 4:00 to 8:00 p.m. at Mission Park South. On Monday, October 18th, a funeral procession will depart the funeral home at 9:30 a.m. for a Funeral Mass at 10:00 a.m. at St. Margaret Mary Catholic Church. Interment to follow at Mission Burial Park South.

A loving husband, brother, uncle and friend, Joe M. Medina went to be with the Lord on October 4, 2021, at the age of 59. He was born on September 24, 1962 in San Antonio, TX. He is preceded in death by his parents, Jesus Medina and Cecilia... View Obituary & Service Information

The family of Joe M. Medina created this Life Tributes page to make it easy to share your memories.

Send flowers to the Medina family.