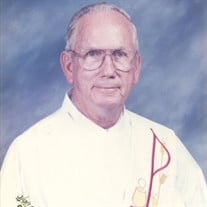 Deacon John Kemper “Jack” Miller went to be with our Lord, with his family by his side, on Saturday, February 12, 2022 at the age of 87. Jack was born November 13, 1934 in San Antonio, Texas to Henry Miller and Sue (Kemper) Miller. Jack graduated from Burbank High School in 1952. After graduating high school, Jack worked for his father at the Henry W. Miller & Sons Painting and Decorating business along with his brothers. He served in the US Army & Reserves from 1955 to 1960. Jack married his sunshine of 64 years, Frances Woelfler on December 28th, 1957 settling in Southeast Bexar County. After many years in the family business, he decided to start his own Painting & Decorating Business. His career in this industry spanned over 25 years. An opportunity to become a Civil Service employee found him switching his career. He worked for several years at Randolph AFB as a Painting Inspector, Lackland AFB as a Project Inspector & Project Manager, and the Civil Engineer Group at Kelly AFB in San Antonio. Jack retired from Civil Service as a Construction Inspector at Lackland AFB in 1997. He kept very busy after retiring, starting his own business as a Real Estate Inspector. Later, he joined Hertz Rentals, working several years as a part-time driver moving rental cars throughout Texas. He enjoyed his road trips at Hertz working alongside other retirees, making lifelong friends and making some amazing memories, stories that would be shared for years to come. Jack was a dedicated Catholic and practiced his faith all of his life. Jack was honored as a Knight of Columbus Grand Knight, Council #4315 and Honorary Life Member of the K of C Council #8036. He became a member of St. Anthony’s Catholic Church (SACC) in Elmendorf in 1972, where he was an active member in the SACC Parish Council, Men’s Club, and the CCD as a Teacher. Jack was the founder of the RCIA Program in 1995, and served as one of the cooks of SACC’s Annual Festival helping to make the amazingly delicious BBQ Sauce, along with many other SACC service roles. Jack was ordained by Archbishop Patrick Flores as a Catholic Deacon in September 1992 and served in this role for 25 years at St. Anthony’s before retiring in September 2017. He embraced his role as a Deacon and shared his faith throughout the community, participating in and performing countless Baptisms, Rosaries, Weddings, Funerals, Homilies, as well as visiting the sick, and fulfilling countless other services for the SACC Parish. He touched many lives as a Deacon, helping others to grow in their faith which enabled him to further grow in his own faith. Jack along with his sunshine, Frances, enjoyed 9 Pin Team Bowling, and were members of a Bunco Club for many years, enjoying these times with family and lifelong friends. He was an avid hunter, hunting alongside his mother, father, brothers, wife and children, and friends. There were countless memories made and stories told. He enjoyed traveling the world. He was able to travel to Holland, Belgium, and Alaska to name a few when visiting his daughter on her deployments. In later years, Jack enjoyed keeping busy “making big sticks into little sticks” on his Pecan Orchard which consisted of over 100 trees, planted in 1992, with his beloved family. He tended his orchard and all of his property with great diligence. He could often be seen climbing ladders from the inside of the bed of his truck leaned against a Pecan Tree in his 80’s. If a limb needed cutting, pecans needed shelling, grass needed mowing, Jack (Papa) was happy to oblige. He loved animals, talking & playing with the family cats and dogs throughout the years. Jack loved his family and would always say how Blessed he was and what a blessing they were to him. Jack was proceeded in death by parents, Henry Jr. and Sue Miller, brother Henry III & wife Jeanette, and brother Tommy. Jack is survived by his sunshine and wife of 64 years Frances Miller, daughter Suzanne Miller (Nancy), son John Miller, Jr. (Kim), grandson Wyatt Miller, numerous Sisters-in-law, cousins, nieces, nephews and friends. Jack never met a baby or child he could not communicate with and/or give a hug. To honor his love of children, memorial donations may be made in his name to St. Jude Children’s Research Hospital. Visitation will begin at 5:00 pm followed by the Rosary at 6:30 pm on Monday, February 28, 2022 at Mission Park Funeral Chapels South, 1700 SE Military Dr., 78214. Funeral Mass will be held on Tuesday, March 1, 2022 at 10:00 am at St. Anthony’s Catholic Church, 14632 Kilowatt Rd, Elmendorf TX 78112. Interment will follow at St. Anthony’s Catholic Church Cemetery. Reception will be held at the St. Anthony’s Catholic Church Hall.

The family of John K. Miller created this Life Tributes page to make it easy to share your memories.

Deacon John Kemper “Jack” Miller went to be with our Lord, with...

Send flowers to the Miller family.