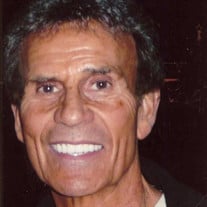 John “JR” Wesley Russell went to be with our Lord on January 6, 2022 surrounded by his loving family at his home in San Antonio. JR was born in Monahans, Texas in 1945 where he played basketball and football in school. He moved to Austin, with his brother-in-law Skip Byron, where he graduated from Sidney Lanier HS in 1963. His love for sports and athleticism grew while he attended Texas Tech University, in the School of Business, and trained daily in the gym. Many remember JR as an extraordinary salesman and motivator. He began his journey into inspiring others to lead fit and healthy lives with fitness centers in Abilene and Odessa. From there, Jim Wyatt gave him the opportunity to become a co-owner of International Fitness centers in El Paso where he met his wife, Patricia “Patti” Russell. Together they spent the next 15 years helping their members achieve their fitness goals. The pair eventually joined Dr. Joe Davis to open Ultrafit Preventive Medical Centers starting in Edinburg, TX and expanding throughout the state. Their unique health model coupled fitness with preventative medicine by offering free outpatient health care for any member who exercised in the gym ten or more times a month. The Ultrafit concept along with the Amino Acid Diet helped thousands of Texans become both fit and medicine free. After over twenty years of encouraging others to lead healthy lifestyles, JR and Patti sold Ultrafit Preventive Medicine Center and Resort in Kerrville and retired in San Antonio to be closer to their family. As a devoted Christian, JR embodied 1 Peter 4:10: “Each one should use whatever gift he has received to serve others, faithfully administering God’s grace in its various forms.” He was a devoted husband, dad, and grandfather whom his three grandchildren called, “Pops.” JR was famous for his infectious smile and outrageous sense of humor that lit up any room. His stories were legendary, and, as the embodiment of a classic Texan, he loved cars, motorcycles, and hunting. JR is preceded in death by his father, Marvin Russell; his mother, Ada Roslie Russell Roach; his brother, Walter Matthews; his sister, Rose Byron; his father in law, Henry Moss Green; and his brother-in-law, Jimmy Green. He leaves behind the love of his life, Patricia Russell; his son Jason Russell (Vanessa), his daughters, Emily Carroll, Ashley Davis (Johnnie); grandchildren Thatch Russell, Rueger Davis and Ainsley Davis, his sister Marvilyn White (Cecil), his brother-in-law Skip Byron, mother-in-law Anna Belle Green, brother-in-law Hank Green, and sister-in-law Debbie Schwind and many cousins, nieces and nephews, as well as his beloved Pomeranian Acer. A memorial service will be held at Cornerstone Church on March 19th at 11:00am. You may sign in the online guestbook at www.missionparks.com. In lieu of flowers, the family requests donations to be made to Heart-to-Heart Hospice at https://www.htohhfoundation.org/donation/, Cornerstone Church at https://www.sacornerstone.org/give and The Alzheimer’s Association at https://act.alz.org

John &#8220;JR&#8221; Wesley Russell went to be with our Lord on January 6, 2022 surrounded by his loving family at his home in San Antonio. JR was born in Monahans, Texas in 1945 where he played basketball and football in school. He moved... View Obituary & Service Information

The family of John "JR" Wesley Russell created this Life Tributes page to make it easy to share your memories.

John “JR” Wesley Russell went to be with our Lord on January...

Send flowers to the Russell family.