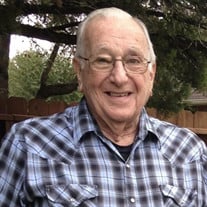 John Henson Underwood went to be with the Lord the morning of February 1, 2022, in San Antonio, TX, just shy of his 90th birthday. John was born on February 20, 1932, in Chattanooga, TN to Thomas Ralston and Wilma Belle Underwood. He graduated from Central High School, where he was a member of the ROTC Firing Squad and the cheer team. It was at Central High School that John met Joyce Marie Myhan, who would later become his wife. They married on May 11, 1957, and spent 61 wonderful years together before Joyce passed away in 2018. John joined the US Army and later the US Air Force. He served his country for 22 years before retiring. For jump school, he trained with the 101st Airborne division at Fort Campbell, KY. Parachuting out of planes was one of the most exciting experiences for him, and he continued to jump occasionally after retirement for a total of 127 jumps. His career in the Air Force took him to many countries around the world to include the Aleutian Islands, Newfoundland, Greenland, Turkey, Greece, and Taiwan. Some of his stateside assignments were in Kansas, Kentucky and Texas. He retired from Lackland AFB in San Antonio, and made San Antonio his home. John’s second career was with Allstate Insurance, where he worked as a sales agent for over 20 years. He was a hard worker and enjoyed assisting his customers. He retired from Allstate at the same time as Joyce retired from her position at the school district. During retirement, they took trips to Tennessee and to visit their children and grandchildren. John thrived on working around the house and yard and took great pride in maintaining their home. He enjoyed watching sports, his favorite teams being the Dallas Cowboys and the San Antonio Spurs. John was a person who found joy in giving. He was affectionately known as the “donut man” to those who worked at Wellmed and Firestone. He and Joyce gave birthday cards with a couple dollars in them to the children on their street. He was known to buy diapers in the grocery store for young mothers. John also gave of his time to his community and his church. He worked many hours helping to maintain the High Country neighborhood clubhouse, and voluntarily mowed the church yard at Madison Hills Baptist Church where he and Joyce were members for over 40 years. He was a loving father and husband who enjoyed helping his family. He also enjoyed surprising Joyce with little gifts of flowers, bears or jewelry for just about every holiday one could think of. John is preceded in death by his wife, his parents, and by his sister, Louise Lee. He is survived by his children Larry Underwood (Katherine), Lynne Buckley (Gary), and Lisa Santos (Rudy); Grandchildren David Underwood; Christine Milliken; Joseph and Michael Banda; Brittney, Amanda, Evan and Ben Allen; Mark and Rachel Buckley; Amanda Sonnen and Jacob Santos; 13 great-grandchildren; numerous other family members and a lifetime of friends. Visitation will be held on Monday, February 21, 2022 at 11:00am, with funeral Service at 12:00PM at Madison Hills Baptist Church. A private interment will be held by the family at Ft. Sam Houston National Cemetery. In lieu of flowers, please consider a memorial contribution to the Air Force Aid Society, or the Fisher House Foundation.

John Henson Underwood went to be with the Lord the morning of February 1, 2022, in San Antonio, TX, just shy of his 90th birthday. John was born on February 20, 1932, in Chattanooga, TN to Thomas Ralston and Wilma Belle Underwood. He graduated... View Obituary & Service Information

The family of John Henson Underwood created this Life Tributes page to make it easy to share your memories.

John Henson Underwood went to be with the Lord the morning of...

Send flowers to the Underwood family.