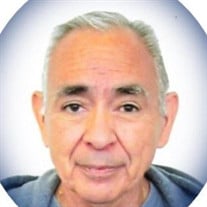 Jose Carlos Lopez, or Joe/Da, was 71 years old when he passed away on January 29, 2022, in San Antonio, TX. He was born to Maria “Nelly” and Refugio M. Lopez on July 5, 1950, in El Paso, TX and was a second generation Mexican American. He is proceeded in death by both of his parents and his sister Bertha. He is survived by his two daughters, Dalia Reinders and Elaina Cooley, as well as his grandson Xavier Lopez. Joe entered the Air Force in 1969 and retired as a Sergeant in 1977. While in the Air Force, Joe traveled many places, learned many different languages, and was an Aircraft Mechanic. After he retired, he continued his support of the Air Force as a civilian worker for Kelly AFB as an Aircraft Mechanic and later worked with logistics of dangerous chemicals. Joe officially retired from Kelly Air Force Base as an Industrial Engineering Technician in 2000. Joe loved to draw, listen to music, watch movies, build things, work on cars and just overall tinkering. Animated movies were some of his favorite movies followed by Superhero/Action movies. He believed he could fix just about anything; it just took him time to learn. One of his favorite pastimes was going to the movies and enjoyed going to breakfast with his grandson and dear friends. His daughters’ favorite memories of their father were on their road trips when he would pull out his box of cassette tapes and they would sing all the songs together. He also loved sweets. He kept candy in his pockets all the time and would never turn down a bowl of ice cream. Joe is a beloved father and friend to all who ever knew him, and he never hesitated to help anyone. It didn’t matter what someone needed, he always found a way to help. He would be there to help and get you what you needed. Visitation will be held on Thursday, February 17, 2022, 5:00 PM to 6:30 PM followed with a Rosary and Funeral Services at Dellcrest Funeral Home, 2023 S WW White Rd, San Antonio, TX 78222. Interment will be at 9:00 AM, Fort Sam Houston National Cemetery at 1520 Harry Wurzbach Rd. San Antonio, TX 78209.

The family of Jose Carlos Lopez created this Life Tributes page to make it easy to share your memories.

Jose Carlos Lopez, or Joe/Da, was 71 years old when he passed...

Send flowers to the Lopez family.