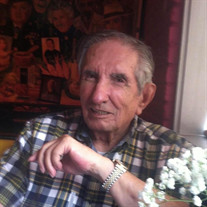 Thou know’st tis common; all that lives must die, passing though nature to eternity. William Shakespeare, Hamlet July 12, 1933 Jose H. Rodriguez was born in Laredo, Texas. He passed to eternity September 7, 2021. Raised on the ranches his father worked on, his youth was spent, by all accounts, doing chores, riding horses, and attending a single room school house. Having outgrown the ranch school, his family moved to town, Hebbronville, Texas, to provide young Jose with a continuing education. In Hebbronville, young Jose, Cuni to everyone, was noted to have a natural athletic ability and enjoyed sports going on to captain the Hebbronville Longhorns football and baseball teams. After graduation, Jose, Joe, joined the newly formed US Air Force, serving over 20 years as a non-commissioned officer, a veteran of the Korean and Vietnam conflicts. During his time in the military Joe received numerous commendations and awards and was a member of the “all armed forces” Judo team, having trained at the Kodokan Judo Institute in Tokyo, Japan were he earned a black belt in Judo and trained in other forms of Asian martial arts. Technical sergeant Joe Rodriguez served in many duty stations around the globe during his military career but was always happy to return to his home and family in South Texas. After his military retirement, Joe earned a BA in Political Sciences from Our Lady of the Lake University. He continued to serve his country and community joining the San Antonio Police Department initially, and then moving on into city government in the department of Public Works for the city of San Antonio, Texas. He retired from city service in 1995 as the Assistant director of Public Works for San Antonio. During his time in city government, Joe enjoyed attending city council meetings and working with city and community organizations to address public works issues and projects in one of the largest and most vibrant cities in the county. Joe was instrumental as a liaison between community organizations and city government setting the precedent for community and city alliances and cooperation. After retirement, and not the type to take up golf or be content to sit on the shore fishing, Joe dabbled in public works consulting, real estate, and the restaurant business. He maintained many close friendships with his “taco and coffee” group, read voraciously, and enjoyed time with his wife and family. He was a San Antonio Spurs, Houston Astros, and Dallas Cowboy fan. In the words of Pericles, “What you leave behind is not what is engraved on stone monuments, but what is woven into the lives of others” As accomplished as Joe was in his public life, he was most proud of his family. Joe married the love of his life, and fellow Hebbronville Longhorn, Lita Ramos in 1958. Together they raised three wonderful “rug rats”, Gina, Joe and Brenda. As busy as Joe and Lita could be, they always made time to help with homework, attended school activities and sporting events, offer advice to the “kids” both solicited and unsolicited, provided shoulders to cry on, gave hugs when needed, disciplined when appropriate, and made sure that all chores assigned were done. Joe was exceptionally good at DIY projects for his children’s pets, cars, homes and work. Joe, Grandpa or Papi, as he was known to his grandkids, was especially proud of his grandchildren, Jacob, Forrest, Michaela, and Raphael. He offered the newest generation a tangible glimpse into the past, and had a way of “spinning a yarn” that captivated his grandkids. Joe was preceded in death by his parents, Guadalupe and Juanna Rodriguez, and his wife of 58 years, Lita Ramos Rodriguez. He is survived by his daughters Gina Rodriguez Neill and Brenda Rodriguez, his son Joseph Rodriguez, daughter-in-law Anna Papaliodis Rodriguez, as well as his grandchildren, Forrest Neill, Jacob, Michaela, and Raphael Rodriguez. The world is a little brighter because he was here. May his memory be eternal. In lieu of flowers the family request that you save the money, enjoy a beer, preferably Lone Star, (responsibly) with loved ones, reflect on the good things in life, and move forward, doing right for the world.

Thou know&#8217;st tis common; all that lives must die, passing though nature to eternity. William Shakespeare, Hamlet July 12, 1933 Jose H. Rodriguez was born in Laredo, Texas. He passed to eternity September 7, 2021. Raised on the ranches... View Obituary & Service Information

The family of Jose Heberto Rodriguez created this Life Tributes page to make it easy to share your memories.

Thou know’st tis common; all that lives must die, passing though...

Send flowers to the Rodriguez family.