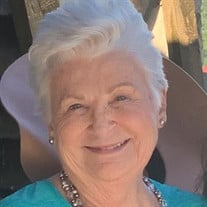 Judith Lynn Swan was born on August 27, 1938 in Chicago, Illinois to Lorin Thomas “Tom” Croskey and Eleanor Ruth Smith. In the late 1940s, she moved with her family, which now included younger sister Lois Joyce, to Mission Park, Kansas. In the mid-1950s they were joined by Eleanor’s mother Catherine Smith, with whom Lynn was very close. Lynn attended Shawnee Mission High School. Tragically her father, Tom, passed away suddenly of a heart attack in March 1957 at the age of 44. Later that year, in August 1957, her beloved grandmother Catherine passed at the age of 75. Lynn was 18 years old. That fall she matriculated to the University of Kansas in Lawrence, Kansas. During this time, she attended a Phi Kappa Psi party at the University of Missouri and met Ernest "Ernie" Swan. They were married in March 1958 and welcomed their first child, Lori, in Kirksville, Missouri. Ernie started working for Sears and the family was transferred to Lincoln, Nebraska. After losing their second child, Kelly, at 6 weeks old in 1960, they welcomed David Scott in 1962 and Jacqueline “Jackie'' Corinne in 1963. The family moved to Overland Park, Kansas for two years and then finally settled in the Colonies North Summit neighborhood of San Antonio, TX in 1969. Once her children had entered school, she decided to return to her university education and began classes at the Incarnate Word College for a Bachelor's degree in Home Economics Education. After graduation, she served the SAISD as a teacher at South San West Campus High School for 25 years. After retirement, she continued to serve as a substitute teacher at many of the schools where four of her grandchildren attended, including Clark High School. She and Ernie shared 3 children, 8 grandchildren, and 4 great-grandchildren and were married for 64 years. Together they shared an abundant life full of traveling, at her insistence, as often and as far as she could. They were very active parents and grandparents and their greatest joy was attending as many football, baseball, soccer and basketball games, gymnastics meets, dance and piano recitals, graduations, pep rallies, and talent shows as they possibly could. They started and passed on many treasured family traditions of boating on Medina Lake, camping in Garner State Park, and going on frequent trips to visit family in Indiana, Ohio, and Colorado. Lynn loved to be surrounded by her family. She never hesitated to share an opinion, solicited or not, loved to laugh and made everything more interesting. She made everywhere feel like home. She passed away peacefully on the morning of March 20, 2022 and is survived by her loving husband, Ernie, her children, Lori and her husband Terry, David and his wife Lori, and Jackie, her grandchildren, Allison and her husband Nick, Lauren, Pam, Grant, Lindsey and her husband Scott, Reagan and Max, her sister, Lois, and her great-grandchildren, Ella, Mac, Reid, and Forrest. She is preceded in death by her grandson, Curt, whom she missed every day. We love you and miss you, Erman, and know you are in heaven smiling down on us. Visitation is Friday, April 1, from 5-7, at Mission Park Funeral Home on Cherry Ridge. The funeral service will be Saturday, April 2, 10:00 AM at Mission Park Funeral Home on Cherry Ridge. In lieu of flowers, the family requests donations to be made in her memory to the Arthritis Foundation.

The family of Judith Lynn Swan created this Life Tributes page to make it easy to share your memories.

Send flowers to the Swan family.