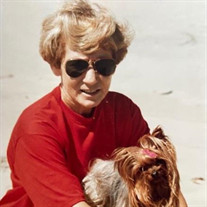 Katherine (Kathy) Maynard Willis, 79, passed away September 3 at her family home in San Antonio, Texas. Kathy was born August 1, 1942 to Fairy Belle Maynard Lewis and Carl Joe Maynard, a life long resident of San Antonio, she grew up with 3 sisters, Thelma Jo Maynard Voeltz, Connie Maynard Linker and Barbara Ann Maynard Kalina. She was a loving devoted Wife of 58 years to James (Jim) Allen Willis and an exceptionally caring Mother to 2 sons James (Jimmy) Allen Willis Jr. and Michael Jay Willis Kathy graduated from Sam Houston High School, in San Antonio, where she served as Head Varsity Cheerleader. Her love for sports continued into her adulthood becoming an accomplished athlete in her home town. Her sport was tennis, as she was Captain of teams that went to Nationals 11 times winning the National Championship in 1998 and with her team “UTSA Super Senior League 7.0” won a National Championship in 2011. Kathy was an exceptional person who spent years as a volunteer, giving her time her talent and her treasure to numerous charitable efforts and services. Her kind, humble, gentle and loving spirit created a deep connection with those she worked with and spent time with, even in a crowd when she spoke to you, it was as if you were the most important person there. She had that ability and that strength to make you know that she wanted to be there with you and be there for you. Kathy is survived by her husband Jim Willis. her sons Jimmy (Hope) Willis and Michael (Lisa) Willis, her sister Connie Maynard Linker, her niece Barbara (Michael) Garrott, her nephew Bill (Amy) Kalina 7 grandchildren and 7 great grandchildren. Kathy was preceded in death by her parents Carl Joe Maynard, Fairy Belle Maynard Lewis, her step father Douglas Lewis, her sisters Thelma Jo Maynard Voeltz and Barbara Ann Maynard Kalina,her niece Penny Bronson, and her nephew Joey Kalina. A Memorial Service will be held Sunday, September 12, 2021 at 3:00PM at Mission Park Funeral Chapel Cherry Ridge 3401 Cherry Ridge San Antonio, TX 78230 Phone (210) 349-1414 Live Streaming will be available at www.missionparks.com In lieu of Flowers donations can be made to the charity of your choice.

The family of Katherine (Kathy) Maynard Willis created this Life Tributes page to make it easy to share your memories.

Send flowers to the Willis family.