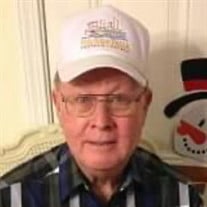 Larry Jene Johnson was called home on Tuesday, November 23, 2021, at peace and surrounded by family. In his 84 years, he saw many miles of his beloved country and made countless memories. Jene was born September 8, 1937, to parents Joseph E. and Alma I (Roberts) Johnson. He grew up in San Antonio, Texas with his three siblings, spending time with family and traveling to the Texas coast on summer vacations. He attended school at Hot Wells and graduated from Burbank High School in 1958. His fondest memories from high school included participating in FFA, playing football, and running track. He enlisted in the Air National Guard in 1956, was transferred to the Air Force Reserves and was Honorably Discharged in January 1962. Jene worked for Texas Highway Department and San Antonio Transit before going to work for Continental Trailways as a bus driver in 1964. After Continental Trailways merged with Greyhound, he continued to drive for Greyhound until his retirement. A conversation with Jene could take you just about anywhere in the country, and he had many stories of the places and people he met while he was driving. Any place you could name, he has probably been through at one time and can tell you about it. Jene’s love for travelling extended well past his career. He was thankful to take many trips with his mother Alma (Tiny), his brother Donald Johnson and wife Ginger, and his sister Marian Boubel and husband Marvin. One of his favorite trips was an annual chartered bus trip to Las Vegas with the same group of passengers every year. He loved going down to the Texas coast and to the mountains every chance he had. He was also a big fan of the San Antonio Spurs, Texas A&M football and loved collecting photos of family members and Christmas wrapping paper. A long life filled with many travels also included a healthy and growing family whom he loved very well. From two marriages he was very proud to have three sons, nine grandchildren and one great-granddaughter. Larry Jene Johnson Jr. and wife Pamela of George West, Kelsey Wright (Tyler) and great-granddaughter Leighton Wright, and Jacy Swann (Joseph). Joseph L. Johnson and wife Kerri of La Vernia, Taylor Johnson, Dylan Johnson (Devon), and Alyssa Johnson. Jonathan Johnson and wife Melissa of Prosper, Isabella Johnson, twins Tristan and Jayden Johnson, and Emerald Johnson. He is also survived by his sister Marian Boubel and husband Marvin, many nieces, nephews, great-nieces, and great-nephews. Jene was preceded in death by his parents, sister Marie Sholl, brother Donald Johnson, niece Wanda, and nephew David. The Johnson family would also like to extend their deepest gratitude to La Diferencia Hospice and Michelle, Jesse, Rocky, and Elaine. We will share a meal and fellowship following the service.

Larry Jene Johnson was called home on Tuesday, November 23, 2021, at peace and surrounded by family. In his 84 years, he saw many miles of his beloved country and made countless memories. Jene was born September 8, 1937, to parents Joseph E.... View Obituary & Service Information

The family of Larry J. Johnson Sr created this Life Tributes page to make it easy to share your memories.

Send flowers to the Johnson family.