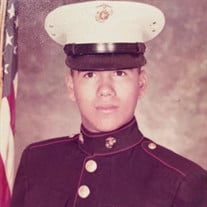 Larry was a great man of God, full of love, and strength in his faith. On September 8, 2021, at the age of 65, he won the race and has now gone home with the Lord. He was born October 18, 1955 in San Antonio, Texas to the late Severo Sr. & Jessie Ortiz. He was the sixth child of eight, and three of his siblings preceded him to the Kingdom. Larry proudly served his country as a United States Marine, which he joined as soon as he graduated when he was 18 years old. He loved to BBQ and received his Master BBQ certification from The Original Rudy’s BBQ. He was also known as the King of Salsa not just for dancing, but because he made the best salsa around. Larry leaves to cherish his loving memory, his wife of 34 years, Irma Ortiz. He also leaves behind his siblings: Diana O. Brooks, Severo Ortiz, Eric Ortiz & Lucy, Belinda Kaminski & Dennis; his children Michael Martinez & Andrea, Monica A. Schaefer & Lance, Jennifer Denise Ortiz & Ben, Larry S. Ortiz, Jr. & Jennifer, Carlos I. Ortiz, Hannah I. Ortiz; his ten grandchildren, his many loving nieces, nephews, cousins, and friends. He also leaves behind his faithful companion Blue.

The family of Larry S. Ortiz created this Life Tributes page to make it easy to share your memories.

Larry was a great man of God, full of love, and strength in his...

Send flowers to the Ortiz family.