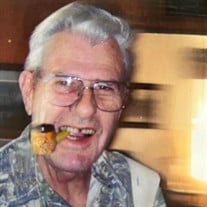 Luther “Lee” Leopard, Jr., age 84, entered eternal rest on February 14, 2022. Born on March 12, 1937 in Waco, Texas to Luther and Julia Leopard, Lee was preceded in death by his parents and his brother, Billy Joe Leopard. He was a son, a brother, a husband, a father, a grandfather, and a great-grandfather. As a lifetime member of Grace Lutheran Church, he lived a Christ-centered life, with a strong commitment to his family and church that reflected his Christian values. As a member of Grace, he served in many capacities and several times as Congregational President and Property Board Chair. His welcoming smile and hugs on Sunday mornings as a Greeter warmed so many hearts and endeared him to the entire congregation. He was a member of Charles Anderson Lodge and a Mason for over 50 years. Lee assisted in building this lodge and served as a master teacher and mentor to so many members throughout his lifetime. Lee coordinated Masonic funerals and participated in the ceremonies until his health declined. As a member of the Sojourners he was a proud patriot participating in all flag ceremonies in support of our nation and our military. For many years he served in the Bexar County Sheriff Reserves and was a member of the Bexar County Gun Slingers. Lee enjoyed hunting and fishing, plus he was an accomplished craftsman working adeptly with leather and wood and he was an avid photographer. Lee is survived by Ruth Leopard his beloved wife of 68 ½ years; beloved daughters Kathy Leopard Ensley of San Antonio and Deanna (Kent) Grist of Boerne. His beloved grandchildren: Mike (Anne) Farringer, Kim (Penn) Mallery, Todd (Janet) Ensley, Kris Ensley, Kyle (Chrissy) Ensley, Dean (Stacy) Ensley, Jessica (Darren) White, and Chelsea (Vincent) Harris, plus nine great-grandchildren, several nephews and cousins, and many friends. Lee will truly be missed by his family and friends. A Memorial Service in remembrance of Lee’s life will be on Saturday, March 12th at 10:30 am at Grace Lutheran Church 504 Avenue E 78215 followed by a reception at Charles W. Anderson Lodge #1413 10103 Eveningway Drive 78233. In lieu of flowers, the family requests that memorials be given to Grace Lutheran Church or Charles W. Anderson Lodge #1413.

The family of Luther "Lee" Leopard Jr. created this Life Tributes page to make it easy to share your memories.

Send flowers to the Leopard family.