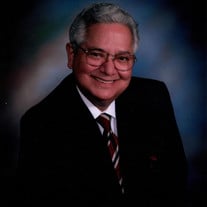 On Saturday, October 30, 2021, our beloved Dr. Marco A. Lopez, Jr. reached the end of his sweet journey here on earth and entered the realm of everlasting life as an angel in heaven. Marco was born in Havana, Cuba, on January 17, 1944, as the only child to his proud parents, Dr. Marco Antonio Lopez Hidalgo and Alejandrina Paredes Conejo. The Lopez family fled the growing oppression of the Castro dictatorship in 1960 and sought refuge in their new cherished home, the United States of America. Overcoming cultural and language barriers, Marco finished high school. He graduated from the University of Illinois at Urbana-Champaign, where he and his first wife, Judy Lopez, welcomed their daughter Linda into the world. Undaunted by nay-sayers and the challenges of being a young father and student, Marco pursued his dream of becoming a physician. He enrolled at the Universidad Autónoma de Guadalajara School of Medicine. During this time, Marco and Judy welcomed their son, Marc Andrew, to the family. With a growing family, Marco jumped at the opportunity to transfer from the medical school in Jalisco, Mexico, to the then-new University of Texas Medical School in San Antonio, Texas. Marco completed his clinical internship and residency in obstetrics and gynecology in 1975 while simultaneously serving as an Army reserve physician under the Berry plan. Following his residency, Marco honed his medical expertise at the OB/GYN department at the 97th General Army Hospital, Frankfurt, Germany, where he served as an Army major until 1979. Marco and Judy divorced shortly after that, but they remained steadfast co-parents and life-long friends. After his military service, Marco returned to San Antonio, Texas and settled into private practice. Marco then met the love of his life, Carolyn Kranz Bluhm. Cliché as it may sound, it was truly “love at first sight.” Marco and Carolyn were married in 1985, and the family instantly grew. Marco proudly welcomed two more children, Stephanie and Michael Bluhm, as his daughter and son. Carol likewise welcomed Linda and Marc Andrew into her life as her children. Throughout his career and life, Marco remained a fierce advocate for women of all walks of life. He vigorously supported women’s health initiatives and issues throughout his long career. Generations entered this world assisted by his skillful care for mother and child. He proudly displayed photos of “his babies” on the walls of his practice, along with countless letters, notes, and mementos of love and thanks. He was esteemed by colleagues and loved by patients, innumerable friends, and family. Marco was an instant friend. People mattered to him. He candidly acknowledged the worth, talents, and relevance of each person. He greeted the stranger as a friend and made those he encountered feel welcome and important. His heart was HUGE. We now bear the depth of his loss. Marco is survived by his beloved wife, Carolyn Kranz Lopez; daughter, Linda Lopez (Joanne Lemon); son Dr. Marc Andrew Lopez; daughter Stephanie Bluhm Carrales (James Carrales); son Dr. J. Michael Bluhm (Dr. Maria Danet Lapiz-Bluhm); grandchildren Jenny, Austin, Alexander, Braden, Dane, Andrew, and Mikaela; great-granddaughter, Sloan Ryan; countless, beloved cousins, other family, friends, and friends, and friends…Rest in peace, sweet Marco. You will live in us forever. Services will be private. You may wish to leave a memory or message on his Tribute Wall.

On Saturday, October 30, 2021, our beloved Dr. Marco A. Lopez, Jr. reached the end of his sweet journey here on earth and entered the realm of everlasting life as an angel in heaven. Marco was born in Havana, Cuba, on January 17, 1944, as the... View Obituary & Service Information

The family of Marco A. Lopez, Jr., M.D. created this Life Tributes page to make it easy to share your memories.