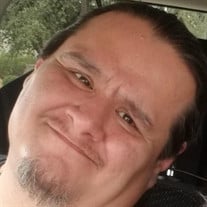 We mournfully announce the passing of Mark Anthony Gonzales, 46, of San Antonio, Texas. Mark Anthony Gonzales passed away on September 4th. Mark Anthony Gonzales, born to Alfredo Gonzales Sr. and Carmen T. Gonzales, took his first breath on September 11, 1974. Mark Anthony Gonzales was a force to be reckoned with from the get-go. While mark never married, he lived a full and vibrant life with more friends than anyone could count. His nephews and nieces meant more to him than words can describe. He spent most of his time spending it with family and friends. He loved playing Dominos, drinking, working on his truck, fishing, shooting pool, and watching movies/tv shows like Jeopardy and horror movies with his family. We will miss him dearly. He was preceded in death by his father Alfredo Gonzales Sr., grandparents Sixto Torres Sr., Aurora Gonzales, and Salvador Gonzales. He is survived by his mother Carmen T. Gonzales; grandmother; Altagracia Torres, brothers; Alfredo Gonzales Jr., Salvador Gonzales; sister in law, Epifonia Esparza, nieces and nephews; Dezmin Garcia, Kayla Nevaeh Gonzales, Matthew Cuevas, Abigale Cuevas, Anastasia Lee Gonzales; aunts and uncles. Visitation will be Monday, September 20th, from 5 – 9 p.m. at Brookehill Funeral Home with a Rosary to be recited at 7 p.m. Procession will depart the funeral home after a Chapel Service at 10:00 a.m. Tuesday, September 21st at Brookehill Funeral Home. Interment will follow at St. Anthony Cemetery in Elmendorf, TX.

The family of Mark Anthony Gonzales created this Life Tributes page to make it easy to share your memories.

We mournfully announce the passing of Mark Anthony Gonzales,...