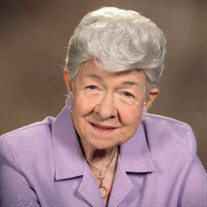 Born in Abilene, TX to Charles and Edith Davis, Martha Marie Fackler passed away peacefully on April 10, 2022 at the age of 92. After graduating from Brackenridge High School in San Antonio, she did commercials for the Philco Television Company, and modeled for the once popular Wolf & Marx Department store. On June 21, 1951, she married Indiana native Rev. Richard L Fackler at Grace Lutheran Church in San Antonio where he was serving his senior year internship. They briefly returned to Capital University in Columbus, Ohio for his graduation from the seminary in 1952. After serving several parishes in Dallas and Freeport, TX, they began life again in San Antonio at Good Shepherd Lutheran Church in 1964. Following several serious illnesses, the family lost Rev. Fackler to cancer in September 1968. Throughout the years, Martha continued with her education and received a Bachelor of Science in Nursing at The University of The Incarnate Word, Master of Science in Nursing at the University of Texas in Austin, and worked on her PhD in Administration at the University of Texas in Arlington. While in the health care field, she worked as a patient care nurse in the ICU and CCU during the Vietnam War, served as a Civil Service Head nurse at Brooke Army Medical Center and Supervisor of Nurses at Arlington Memorial Hospital. She also served as a Professor at The University of The Incarnate Word in San Antonio as well as Texas Women’s University in Dallas on their Parkland Campus. Martha also served as a Senior Nurse Consultant in Arlington, TX designing and selecting equipment for patient care in medical schools and hospitals. Among her completed projects were Vanderbilt University and Creighton University Medical Schools & Hospitals, and the King Faisal Hospital in Saudi Arabia. Following retirement from nursing, teaching and consulting, a second career called her into the area of investments, insurance, and finance ultimately owning an agency in Arlington, TX. In Nov. 1999, she returned to San Antonio to be closer to family. She is preceded in death by her loving husband, Rev. Richard Fackler; her mother and father, Charles and Edith Davis; brother, Charles Davis, Jr. and sister, Mary Davis Holmes. Martha is survived by her two children, Richard Fackler of San Antonio and Debbie Lanier of Austin in addition to her granddaughter, Kassandra Fackler-Gomez and husband, Nathan and her two great-granddaughters, Jenesis and Nevaeh. She is also survived by a number of nieces, great nieces and nephews along with great-great nieces and great-great nephews. In lieu of flowers, donations may be made in memory of Martha to the American Cancer Society or Alzheimer’s Association.

Born in Abilene, TX to Charles and Edith Davis, Martha Marie Fackler passed away peacefully on April 10, 2022 at the age of 92. After graduating from Brackenridge High School in San Antonio, she did commercials for the Philco Television Company,... View Obituary & Service Information

The family of Martha M. Fackler created this Life Tributes page to make it easy to share your memories.

Send flowers to the Fackler family.