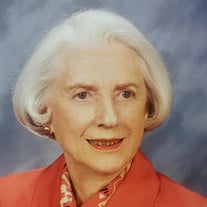 Martha Lois Samuels (nee Cottle) passed away peacefully on Monday, October 11, 2021. She was at home in San Antonio, Texas, surrounded by family following a loving prayer by a chaplain. She was just shy of her 95th birthday. She was preceded in death by her husband, Leslie “Perry” Samuels and her son, Garry Leslie Samuels. She will be lovingly remembered by her daughter, Martha “Jenni” Samuels, and her four grandchildren, Macy Haverda, Colton Haverda, Shelby Haverda, and Raven Haverda. Because the “R” in grandma was too hard for the oldest grandchild to pronounce, she was affectionately known to all her grandchildren as “Gammie”. Martha was a very stylish dresser and had a very enviable collection of Christmas sweaters. She prided herself on keeping a clean home, but often spoke very fondly of allowing the grandchildren to wreck her kitchen baking cookies. Martha and Perry, her loving husband of over 50 years, met at UT. Martha and her friends would hang out at the famous drugstore near campus, hoping to see the handsome football players. Perry asked her on their first date by saying, “If you can be ready in ten minutes, I’ll take you to a movie.” And it turned out she could be ready in ten minutes. Martha was a devoted member of First Presbyterian Church. Unless she was in the country hunting deer, she could be counted on to attend the Sunday service. Martha was a fierce lover of tennis, playing the game well into her 70s. All three female grandchildren attempted to learn to play for her, but unfortunately none of them were ever nearly as good as their spry Gammie. She loved to follow her sporting days with dinner at Cappy’s with the family, especially if they had the crab cakes with the Mustang chicken sauce, and, of course, “the staff of life”: bread. As Jenni remembers; "mom loved to drink beer on the beach with all the Bowman family". Port Aransas, Texas, became almost like a second home for the Samuels family, and that of their great friends. A few bottles of Pearl and a few good friends aboard the Peggy D. was one of her favorite ways to spend weekends. The family wishes to thank the caregivers that gave her comfort in her final years: Maria (Rosa) Devers, Olivia Pena, Ivette Avalos, Alejandra Escalante, and her nurse, Patti Zapata, of Kindred Hospice. We will miss Martha’s steadfast commitment to her family, and will always remember how much they helped all of us.

Martha Lois Samuels (nee Cottle) passed away peacefully on Monday, October 11, 2021. She was at home in San Antonio, Texas, surrounded by family following a loving prayer by a chaplain. She was just shy of her 95th birthday. She was preceded... View Obituary & Service Information

The family of Martha L. Samuels created this Life Tributes page to make it easy to share your memories.

Send flowers to the Samuels family.